A Turkish court on Monday sentenced a former military commander to life in prison and dozens of others including opposition members of parliament to long terms for plotting against the government, in a case that has exposed deep divisions in the country.

Retired military chief of staff General Ilker Basbug was sentenced to life for his role in the "Ergenekon" conspiracy to overthrow the government of Prime Minister Tayyip Erdogan.

Announcing verdicts on the nearly 300 defendants in the case, the judges also sentenced three serving parliamentarians from the opposition Republican People's Party (CHP) to between 12 and 35 years in prison.

Earlier, security forces fired tear gas in fields around the courthouse in the Silivri jail complex, west of Istanbul, as defendants' supporters gathered to protest against the five-year trial, a landmark case in the decade-long battle between Erdogan and the secularist establishment. 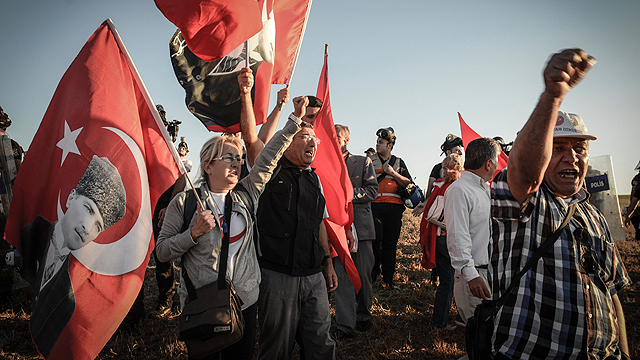 Prosecutors say an alleged network of secular arch-nationalists, code-named Ergenekon, pursued extra-judicial killings and bombings in order to trigger a military coup, an example of the anti-democratic forces which Erdogan says his Islamist-rooted AK Party has fought to stamp out.

Critics, including the main opposition party, have said the charges are trumped up, aimed at stifling opposition and taming the secularist establishment which has long dominated Turkey. They say the judiciary has been subject to political influence in hearing the case.

'This is Erdogan's theater'

"This is Erdogan's trial, it is his theater," Umut Oran, a parliamentarian with the opposition CHP party, told Reuters.

"In the 21st century for a country that wants to become a full member of the European Union, this obvious political trial has no legal basis," he said at the courthouse.

Erdogan has denied interfering in the legal process, stressing the judiciary's independence. But he has criticized the prosecutors handling the case and expressed disquiet at the length of time defendants have been held in custody.

With main access roads shut and protesters' buses prevented from reaching the area, hundreds of the defendants' supporters attempted to cross fields to reach the court and prison complex, but police with riot shields blocked their advance. 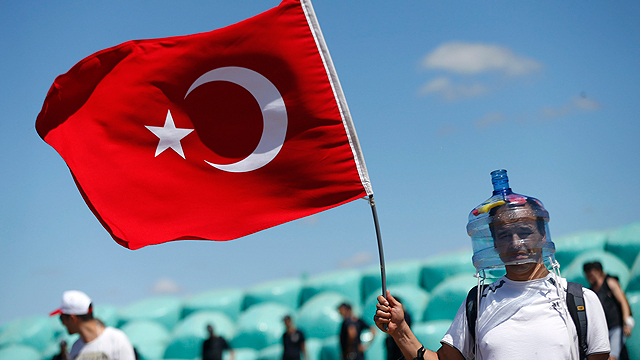 "The day will come when the AKP will pay the price," some chanted on the approach road to Silivri, where hundreds of riot police and gendarmes, a paramilitary force responsible for rural security, were on duty.

Among the 275 defendants accused in the case are military officers, politicians, academics and journalists. They deny the charges. Twenty-one of the defendants were acquitted as the court continued to announce individual verdicts.

Basbug criticised the court on his Twitter account on Sunday, saying the public would not accept the punishment of innocent people.

"The 'court' will announce its verdict in an atmosphere that was not even seen in times of martial law, with even families being banned from coming," he wrote.

"They know they will smear a black stain on the glorious history of the Turkish state and army like never before."

The threat of a coup is not far-fetched: the secularist military staged three coups in Turkey between 1960 and 1980 and pushed the first Islamist-led government out of office in 1997.

But Erdogan has chipped away at the army's influence since his AK Party came to power in 2002, including in the courts with the Ergenekon case and the separate "Sledgehammer" plot.

Last September, the court in Silivri jailed more than 300 military officers for plotting to overthrow Erdogan a decade ago in "Sledgehammer".

The government's control over NATO's second largest army was illustrated on Saturday when Ankara appointed new military commanders in an overhaul of the top ranks, forcing the retirement of a senior general regarded as a government critic. 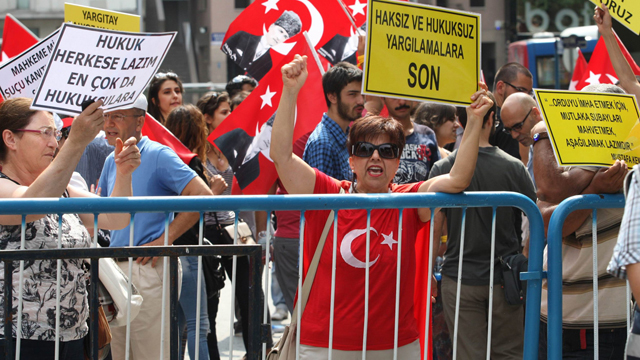 The Turkish public initially welcomed the trial on the grounds it would bring to account the country's "Deep State" - an undefined network of secularists long believed to have been pulling the strings of power in Turkey.

As the trial advanced criticism grew, however. The European Commission also expressed concern.