Jisma Abu Moussa Ibrahim, a Sudanese asylum seeker, placed at Saharonim facility eight months into pregnancy after infiltrating Israel more than year ago. Denied medical attention despite her complaints she was eventually rushed to hospital only to give birth to stillborn

"The doctors in prison took away everything I had, they could have saved my baby but when I gave birth he was already dead, now I have nothing." These are the solemn words of Jisma Abu Moussa Ibrahim, 33, an asylum seeker from Sudan's Darfur region. Eight-months pregnant, she was placed at the Saharonim facility without gynecological care and gave birth to a stillborn a month later at the Soroka Medical Center in Beersheba.

"At nights I dream that I'm holding my baby but when I wake up all I can do it imagine," she says. Earlier this month, Abu Moussa Ibrahim filed a civil suit against the Israel Prison Service claiming medical negligence. She infiltrated Israel in June 2012, after escaping "certain death" and was jailed at the Saharonim holding facility under the Infiltration Prevention Law.

A doctor who examined her upon her arrival at Saharonim said her overall health was "satisfactory." According to the suit, he did not see fit to take her medical history nor did monitor her condition as the pregnancy progressed. She was thus left without any medical supervision. According to the suit, Abu Moussa Ibrahim complained of weakness, pain and general discomfort several times during her stint in Saharonim. But each time she was told to "lay in the shadow and drink water." Her complaints were not recorded and she did not undergo basic examinations required for pregnant women.

Dr. Revital Arbel, an attending at Shaare Zedek's maternity ward, said in an opinion included in the suit that "the treatment given to the plaintiff is unacceptable especially given the fact that the doctor was the only medical professional she had access to." 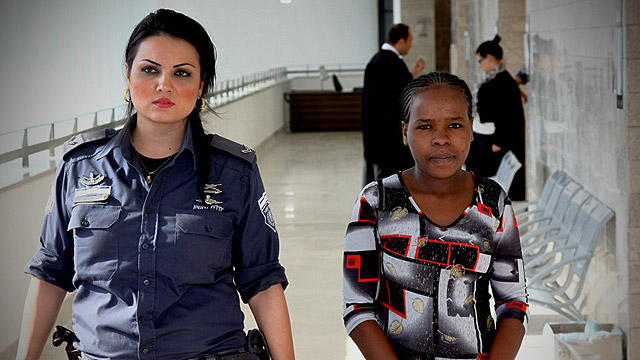 She further claimed that had proper care been given, Abu Moussa Ibrahim's Pre-Eclampsia Toxemia would have been diagnosed much earlier and consequently would have prevented the baby's death.

But the story doesn't end here. Despite the terrible ordeal she underwent, authorities refused to release Abu Moussa Ibrahim even after the loss of her child. She became depressed and was placed on suicide watch at the Givon Prison. She did not receive any mental support despite the recommendation of a psychiatrist who examined her.

The asylum seeker was eventually released on humanitarian grounds last October after having moved several prisons and following a line of court hearings. "I believe that the terrible ordeal endured by the plaintiff in Israel's prisons leaves the state with a moral responsibility for her, at the very least," said Lod District Court Judge Avraham Yaakov, who ordered her release.

According to the Doctors without Borders organization, women held at the Saharonim facility have access to a gynecologist at the Soroka Medical Center only twice a week. Many of them are asylum seekers that have suffered severe sexual abuse in camps in the Sinai Peninsula. Complaints on the matter received by various human rights groups resulted in a 2011 High Court petition for gynecological services in Saharonim. These are available in the Neve Tirza women's holding facility. The court ordered both sides to settle the matter but no progress has been noted as of yet. "This is negligence and total disregard for human life on the part of the Prison Service," said Attorney Rotem Aloni, representing Abu Moussa Ibrahim. "From the moment she was placed under their care and until she arrived in Soroka, the Prison Service had numerous opportunities to treat her and thus prevent the death of the fetus and a terrible trauma."

The Prison Service said in response, "We will file our response to the suit through the State Prosecutor's Office, in due time."