Alex Abou-El-Ella, 29, disguises herself as local to snatch 3-year-old daughter back from Egyptian father two years after he kidnapped her

Alex Abou-El-Ella, a 29-year-old British woman, risked her life to rescue her daughter Mona, three, two years after her husband kidnapped her and took her to his home country of Egypt.

The desperate mother donned a head-to-toe Islamic dress and hid her face behind a veil to carry out a daring mission to snatch her daughter back from the child's father, Britain's Daily Mail reported.

According to the report, Abou-El-Ella ignored Foreign Office warnings not to travel to the country, which is gripped by civil unrest, tracked down the child and disguised herself as a local to carry out the audacious rescue.

Her success was in large part thanks to the help of British author Donya Al-Nahi, who has been nicknamed Jane Bond for her efforts in helping a string of women rescue children snatched by Arab fathers, the Daily Mail said. 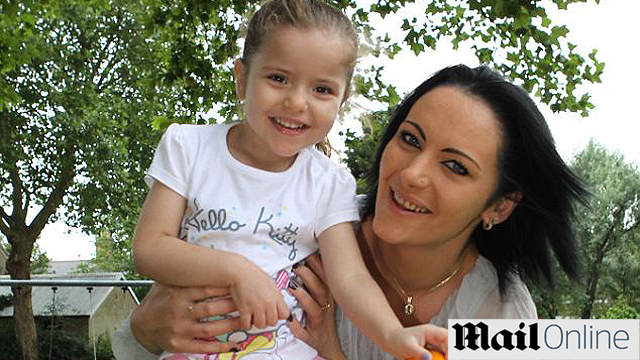 Alex and Mona Abou-El-Ella safely back in England

With the help of Scottish native Al-Nahi, the mother tracked down the nursery where Mona was enrolled and the block of flats where she was living with her father's family.

The two enlisted the help of a local driver and sat staking out the block early in the morning until Mona appeared with an aunt and a boy just before 9 am.

Abou-El-Ella then seized her moment and got out of the car and followed them.

"I was walking behind them, faster and faster, and saw Mona's hand a few meters away from me," she said. "So I grabbed her, pulled her into my arms and the lady looked at my face - but all she could see were my eyes."

She quickly placed the astonished child in the car and drove off with Al-Nahi. The confused toddler cried out for help from the woman she knew as mummy, to Abou-El-Ella's dismay.

"I felt shocked and upset to hear those words coming out of her mouth about another woman," she said. "But after half an hour she looked up at me and said, "Are you my mum?"'

The next challenge was smuggling the child back out of Egypt without alerting the country's authorities. Abou-El-Ella, who was born in Poland but came to Britain as a teenager, used the Polish passport belonging to her older daughter to conceal Mona's Egyptian surname and bribed an official to allow her to board a London-bound flight.

The subterfuge worked, and they arrived back at Heathrow 10 days ago, using Mona's genuine passport to re-enter the UK legally.

She has since contacted her husband to tell him that she has their child.