Only pressure will deter Iran from nuclear bomb, PM asserts after Iranian president calls for dialogue with West. US says waits Iran's 'credible steps' on issue

Prime Minister Benjamin Netanyahu met on Tuesday evening with a delegation of 36 American congressmen headed by Congressman Steny Hoyer. During the meeting Netanyahu claimed that though Iran's president said pressure wouldn't help, in the last two decades pressure was the only thing that helped.

Netanyahu urged increasing pressure on Iran relating to her nuclear program and warned that if the pressure will drop, nothing would deter Iran from achieving its nuclear goals.

Addressing Iranian President Hassan Rohani's speech regarding the nuclear issue, Netanyahu said in a Tuesday statement that pressure on Iran had, in fact, been effective. 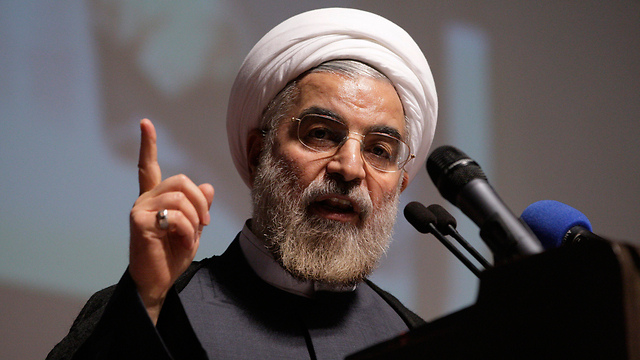 "Iran's president said that pressure won't work. Not true! The only thing that has worked in the last two decades is pressure," the prime minister stressed.

"And the only thing that will work now is increased pressure. I have said that before and I'll say it again, because that's important to understand. You relent on the pressure, they will go all the way. You should sustain the pressure".

Earlier Tuesday, Rohani said Israel "pursues the interests of a foreign country and receives most of its orders from the same country... even US interests are not being considered".

The United States and Israel have said all options, including military action, are open to stop Tehran from acquiring nuclear arms.

The inauguration of Iranian President Hassan Rohani is a chance for that country to move quickly to resolve concerns about its nuclear program, but the United States wants to see actions from Tehran, the State Department said on Tuesday.

The inauguration of Rohani, who took his oath on Sunday, "presents an opportunity for Iran to act quickly to resolve the international community's deep concerns over their nuclear program," said State Department spokeswoman Jen Psaki.

She added, however, "there are steps they need to take to meet their international obligations and find a peaceful solution to this issue, and the ball is in their court."

Rohani, seen in the West as a relatively moderate leader, told his first news conference on Tuesday he was "seriously determined" to resolve the dispute and was ready to enter "serious and substantive" negotiations.

Asked about those remarks, Psaki said, "we want to see credible steps taken" to address concerns that a nuclear program that Tehran says is purely for peaceful needs is actually an effort to build a nuclear bomb."