The Jerusalem Magistrates' Court convicted prominent Religious Zionism leader Rabbi Moti Elon of sexually assaulting a minor on Wednesday. He was found guilty of performing indecent acts against a minor.

The Israeli Institute for behavioral Risk Assessment has been asked to give an opinion on the threat posed by Elon ahead of sentencing.

Asked how he felt about the conviction the rabbi chose to recite a verse of Psalms.

Upon leaving the court, Elon said, "Anything brought down on us by God Almighty we accept with pleasure and kindness."

Elon was indicted in late 2011 for offenses perpetrated in 2005. The prosecution claimed he abused his position as an educator and molested two teenagers on various occasions in 2003 and 2005.

The indictment covered five counts of forceful indecent act and abuse of authority. 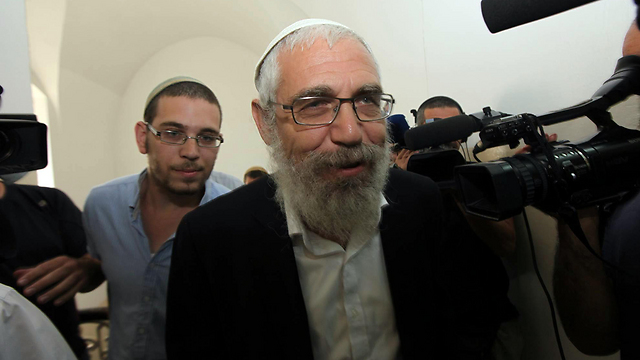 However, last February one of the charges was dropped after one of the complainants refused to testify in court.

According to the indictment, Elon made unwelcome advances at the teenagers, touched them inappropriately and fondled them, all the while claiming it would help their emotional problems.

The rabbi has repeatedly denied the charges claiming he has no memory of the encounters.

The prosecution offered Elon a plea bargain, under which he would have had to enter a guilty plea but would have been spared jail time, but he reportedly refused it.

Friends and family came to support the rabbi in court, among them Lior Katsav, brother of the former president currently serving a seven-year sentence for rape.

Elon's attorney Asher Ohayon said he was surprised by the verdict and intends to appeal,

The sexual assault was first exposed by the Takana Forum which is dedicated to the prevention of sexual harassment within the religious community.

Ayelet Vider-Cohen, one of the founders of the Takana forum and the Kolech organization, welcomed the verdict. "This is certainly a triumph, primarily for the victims," she said.

Earlier on Wednesday, before the verdict was handed, the forum said that Rabbi Elon must refrain from all public activity and personal counseling, regardless of the trial's outcomes.