CAIRO – The message carried by two Republican US senators – to seek a path to reconciliation between Egypt’s military and the interim government it established on one side; and the Muslim Brotherhood and supporters of ousted President Mohamed Morsi on the other – was met with an underwhelming response by Egyptians.

Arriving in Cairo on Tuesday, Senators John McCain (R-Az.) and Lindsey Graham (R-S.C.), both minority members of the Senate Armed Services Committee, received cool receptions from political, military and civil society leaders they met with, as they urged the parties in the dispute to resolve their differences and engage in a national dialogue.

McCain and Graham joined official emissaries from the United States along with representatives of the European Union, the United Arab Emirates and Qatar, all of whom were in Egypt trying to broker a compromise between detained Muslim Brotherhood figures and the military. The ousted Islamists continue to demand the reinstatement of Morsi, who was democratically elected following the overthrow of Hosni Mubarak, but whose term in office ended abruptly when millions of Egyptians took to the streets demanding his removal. The Egyptian military complied, and much of the international community supported the move despite its overtly anti-democratic appearance.

Sen. Graham characterized the American administration’s dilemma when he said, “The people who are in charge were not elected. The people who were elected are in jail. The status quo is not acceptable.” For the US administration, the problem goes deeper because American law prohibits providing aid to a regime that came to power by forcibly removing a democratically-elected government. Yet, there is bi-partisan agreement, as demonstrated by the McCain-Graham trip, that cutting-off the $1.5 billion in annual aid at this juncture would fuel instability, an argument the two minority senators have been pressing that is in-synch with the official position of the Obama administration. Prior to the senators’ arrival in Egypt, US Deputy Secretary of State William Burns met with the jailed head of the Muslim Brotherhood to try and convince him to “accept the reality” that Morsi will not be returned to office, but that plea was rejected outright. "A national dialogue and conciliation are the only way to bring peace to this country," McCain said. "You cannot sit down at the negotiating table and still preach violence in the streets." But McCain and Graham’s message was not well-received by those ousted from power, and their presence less-than-welcome, in part because Muslim Brotherhood leaders were not on the senators' itinerary for their visit to Egypt. "We have no news of their visit,” Essam Al-Aryan, Vice Chairman of the Muslim Brotherhood’s Freedom and Justice Party said. 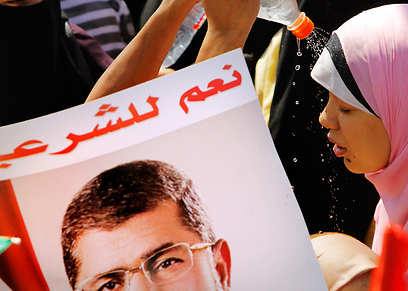 Others were more pointed in their comments. “(McCain and Graham) seemed like they were collaborating with the army, and I think the United States should now reconsider its policy regarding the Muslim Brotherhood,” Egyptian diplomat Mohammed Naguib said of the visit. “The two gentlemen from the US Senate should immediately pack their toothbrushes, maybe take a quick tour around the pyramids and the Sphinx, take a photo of a camel or two, maybe buy a couple of Nefertiti busts for Mrs. McCain and Mrs. Graham, and be on their merry way back to the United States,” he said.

"The Egyptian nation thanks them. They have shown Egyptians amazing insight, immense understanding, stupendous analysis and future vision never before seen or surpassed on the shores of the Nile since Julius Caesar visited. God bless, good bye; and above all, good riddance. Oh, and before I forget, don't come back!" Naguib inveighed. Naguib wasn't the only one who was shocked by the senators' speeches, "I think (the Senator) was joking. It seemed like he was making a speech from Cairo to his supporters in the US," editor of the newspaper Alsharq Al Awsat Abdelsatar Heteita, told The Media Line. Upon arriving in Egypt, the two senators met with Deputy Prime Minister and Defense Minister General Abdel Fatah Al-Sisi; Vice President Mohamed ElBaradei; and Prime Minister Hazem Al-Beblawi; and other Egyptian politicians. The role of Khayrat Al-Shater, the detained Muslim Brotherhood leader who has been allowed to meet with foreign envoys, is still unclear, but obviously remains a key player relative to the Egyptian political crisis. But according to Mohamed Beltagy, General Secretary of the Brotherhood's Freedom and Justice Party, Al-Shater isn't authorized to speak on behalf of the Muslim Brotherhood and its supporters. "The only authority recognized to negotiate with the Americans are the Egyptian people or President Morsi," he told The Media Line. Meanwhile, local and Arab media are reporting a threat of violence against those countries that rejected the Muslim Brotherhood's regime. According to a report in the Kuwaiti newspaper Alrai, Egyptian security forces intercepted three terrorist cells planning to assassinate senior Egyptian officials including Al-Sisi and ElBaradei. Egyptian military and police sources have confirmed that there will be a crackdown on the pro-Morsi protesters through the Eid festival, which marks the end of the holy month of Ramadan, this week. Whatever happens in coming days, political dissent will continue to fester. Some suggest that the senators' visit merely added to the already growing anti-American angst among Egyptians who supported the June 30 revolution that removed Morsi, even if it demonstrates bipartisan unity to constituents back home. Egypt’s military now understands that American political leaders aren't going to support them unless there are serious reconciliation efforts between all political parties involved, including the Muslim Brotherhood, under way. "We believe that we should treat each other with respect. We also support the release of political prisoners and strong national dialogue that includes the Muslim Brotherhood," McCain said. Article written by Sherif Elhelwa