Sex offender Rabbi Elon holds first Torah lesson since conviction, but confronted by man who claims was sexually assaulted in past by another esteemed rabbi, beseeches Elon to 'admit he sinned,' says If he wasn't such a great man I wouldn’t have bothered'

Rabbi Moti Elon conducted his weekly Torah lesson in the Midgal Yeshiva Wednesday evening, just hours after being convicted for performing indecent sexual acts on a minor. During the lesson, Rabbi Elon was confronted by Nahum Pechnik, a man attending the lesson, who stood up and yelled: "I want to tell you that you are a great man, but you need to find the courage to say 'I have sinned'. You are a great man, admit that you've sinned."

Pechnik, 40, a resident of Jerusalem, is a married father of four. According to him, in 1993 he himself was a victim of sexual abuse at the hands of another famous rabbi which he refused to name.
Watch: Rabbi Elon confronted    (צילום: עידו בקר)
X

"I came in the name of all those who were hurt. The rabbi that hurt me is an old man today. At the time I was a soldier and as a result of what happened I dropped out of my elite IDF service track. I couldn’t go on; I didn't have the mental strength for it.

"I was subjected to what the court called 'indecent acts,' and I was in trauma like anyone who has been subjected to sexual assault. I hope (Elon) will have enough courage to admit he sinned. If he wasn't such a great man I wouldn’t have bothered. I just hope he gets out of his denial, and admit that great men also fall.

"The fact that he is a big rabbi does not mean he cannot harm people," he said. 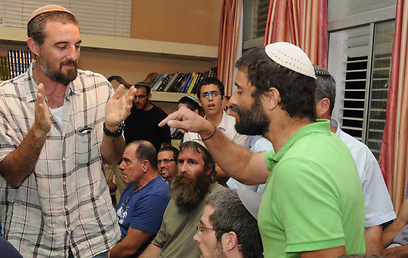 Pechnik (R) argues with Elon supporters (Photo: Avihu Shapira)
According to him he is currently on vacation with his family and left them in Lake Kinneret to come to the event: "Of course I came because there is press here. I came here to voice my anger, to say that it is inconceivable that a convicted man will claim he is the victim. When I came I knew there is a chance they would pulverize me, but I cannot accept this celebration." While Pechnik was attempting to confront Elon, the rabbi's disciples began singing loudly in a bid to drown his comments out, and afterwards the lights were shut off and the young man was aggressively chaperoned out of the hall. 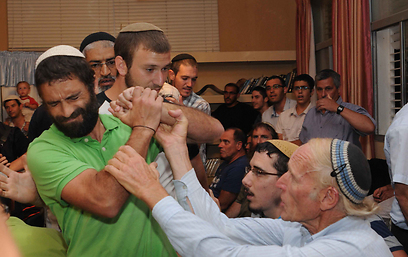 Pechnik confronted by Elon supporters (Photo: Avihu Shapira)
In response, Rabbi Elon said: "This is the month of Elul, the month of forgiveness, I forgive him and forget it. I do not know him."

Mission from the Lord

During his lesson, Elon commented on his conviction, telling those present: "What happened (in the court room) is a mission that the Lord wants us to take on. If the mission is hard, we must take it on with a smile." 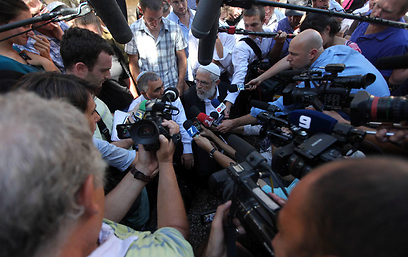 Elon further noted that he happily accepted the court's decision, which he views as a test presented to him by God: "Only if you do not suspect God it doesn't bother you how something will look on screen or camera."

"I want to tell you that when you say a hillel (praise or blessing) it is not just a group of happy (biblical) verses waived together, but the opposite. It is the ability to understand that this is a lesson from God. It is a lesson to wonder if you can praise the bad things that occur along the way in the same way you praise the good, and if you are truly able to add and mend." 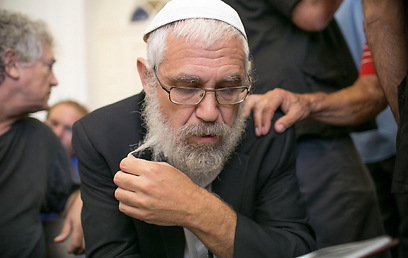 Elon at ruling (Photo: Noam Moskowitz)
Immediately after the conviction, Elon said: "Today is not just the beginning of a (Jewish) month, but the beginning of the month of Elul, this is the month of forgiveness and mercy." The sexual assault was first exposed by the Takana Forum which is dedicated to the prevention of sexual harassment within the religious community.

Ayelet Vider-Cohen, one of the founders of the Takana forum and the Kolech organization, welcomed the verdict. "This is certainly a triumph, primarily for the victims," she said.

Earlier on Wednesday, before the verdict was handed, the forum said that Rabbi Elon must refrain from all public activity and personal counseling, regardless of the trial's outcome.