Dozens march, protest in front of Russian embassy in Tel Aviv, against homophobic legislation in Russia

Some 200 people protested Saturday in front of the Russian embassy in Tel Aviv against LGTB-phobic legislation in Russia. The protesters were crying out "Stop homophobic legislation," "No to Putin's dictatorship," as they are waving gay-pride flags and banging on drums.

Shai Deutch, chairman of the Israeli LGBT organization who attended the rally, said: "This protest is the result of cooperation between community groups and private organizations all protesting against (Russian President) Putin's persecution against the LGBT community."

He added that Putin was "using homophobia as a political tool, and we are here to express our support of the gay community and let it be known that we will not sit idly by while they are being persecuted." 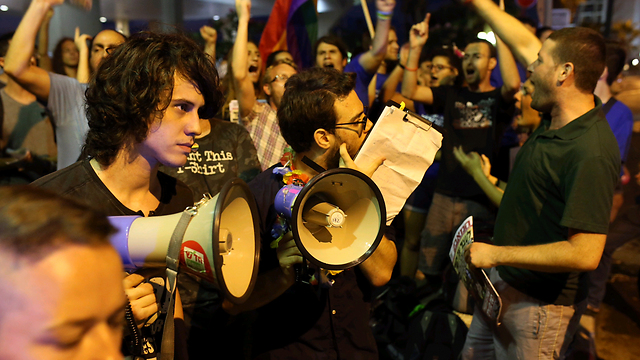 According to organizers, discriminatory laws in Russia, one prohibiting "homosexual propaganda," and one penalizing those who offend religious feelings, in fact hinder "any substance that promotes equal rights for the LGBT community," adding that "today it is practically illegal to be gay, lesbian, bi or trance out of the closet in Russia."

Amnon Brownfield Stein, one of the rally's organizers, said: "Russia has not been an open place for gays for years, but it was always a local issue. Last June the parliament passed two laws, which make it impossible being outside the closet in Russia and not get arrested. There are underground (groups) that abuse homosexuals, and the international community cannot stay silent any longer."

Adi, a protester from Rishon Letzion, said: "It is a common fate, it does not matter where a person comes from, he has a right to live with dignity."

"As we celebrate our Pride events," the event statement read, "the LGBT community in Russia deals with severe hatred and harsh discrimination. It is targeted with boundless police brutality, hateful public stigmatization and discriminatory and cruel legislation."

The event statement also mentions the plight of the members of the punk rock group Pussy Riot, who are in prison for singing against Vladimir Putin and the church's support of him. The arrest of the members of the Russian group, organizers noted, signifies the disappearance of "freedom of expression and assembly." 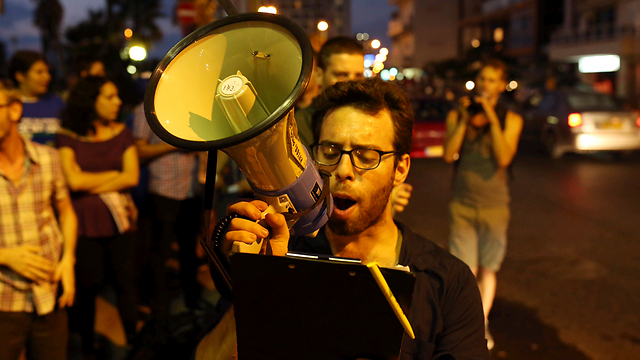 The march urged protesters to demand Russian representatives in Israel to promote "justice and equality for the LGBT community in Russia."

Meanwhile, there are a growing number of reports regarding neo-Nazi groups who seduce and abuse homosexuals, while Russian authorities do no act towards preventing violence against the gay community.

Some protesters positioned themselves against the wall of the embassy for a "kissing demonstration".

The demonstrators also called to not hold the winter Olympics in Sochi, Russia, due to fear for athletes who are part of the gay community, who may be arrested based on the Russian legislation that forbids coming out of the closet.

Earlier Saturday, it was reported that hundreds of people protested in London against a Russian anti-gay propaganda law that has attracted international condemnation as the world athletics championships kick off in Moscow.

Gathering in the British capital near the residence of Prime Minister David Cameron and the foreign ministry, demonstrators called for the government to push Russia to repeal the laws.

"Putin is the 'Czar of Homophobia'," veteran gay rights campaigner Peter Tatchell wrote on his website ahead of the protests.