Some 20 Israelis who lost loved ones in terror attacks march to Supreme Court to protest government's decision to release Palestinian terrorists. 'Why are we here alone,' cries one mother

Some 20 Israelis whose loved ones' killers are set to be released as part of renewed peace talks between Israel and the Palestinians marched from the Mount Herzl cemetery to the Supreme Court in Jerusalem on Sunday in protest of intended prisoners' release.

The High Court of Justice held a hearing on a petition filed against the move by bereaved families. On Sunday evening, a ministerial committee will convene to discuss which 26 prisoners will be the first to be released. Prime Minister Benjamin Netanyahu, who is recovering from a hernia operation, will not be present. Defense Minister Moshe Ya'alon will serve as committee chair.

At the end of the hearing, from which it could be inferred that the panel will not overturn past rulings, some family members ran up to the judges to express their protest. "I'm not just a number on a list," said Gila Molcho. "You can't keep treating this as a purely legal proceeding."

During the hearing, Attorney Naftali Vertzberg from the Almagor organization argued that the release in question is entirely different from past gestures. "This time there's no one holding a gun against our head like in the Shalit deal. It's just a gesture and in all the past gestures we released terrorists who served time for much lesser charges." 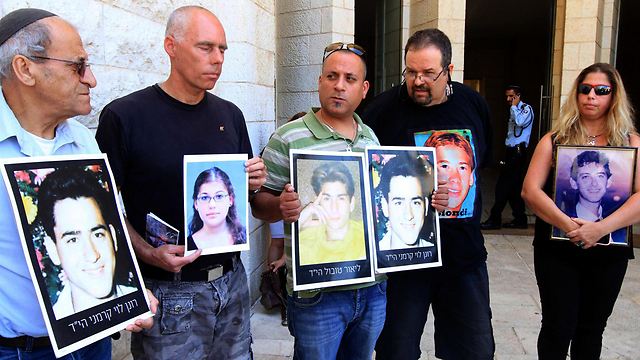 Attorney Michal Tzuck-Shefer representing the State said that the decision is one for the government but noted that if negotiations fail the release can be halted.

The bereaved families marched holding pictures of their loved ones and white flags. Miriam and Yaakov Tobol, who lost their son Lior in a terror attack in 1990 said that on Thursday they got a call from the National Insurance Institute informing them that their son's killer will be released this week.

"We phoned the Defense Ministry, the Prime Minister's Office and were told we'll get a call back, but we never did," said a tearful Yaakov. "No one there feels this pain in our hearts. For 23 years I haven't been able to sleep trying to recreate what happened to my son in those moments. The investigators told us he managed to run for 80 meters before his blood flow stopped. Let the ministers think about that before they sign off (on the release)."

Established two weeks ago, the ministerial committee will convene for the first time on Sunday evening to determine which 26 prisoners will be released on Tuesday - a day before Israeli and Palestinian negotiators meet in Jerusalem. 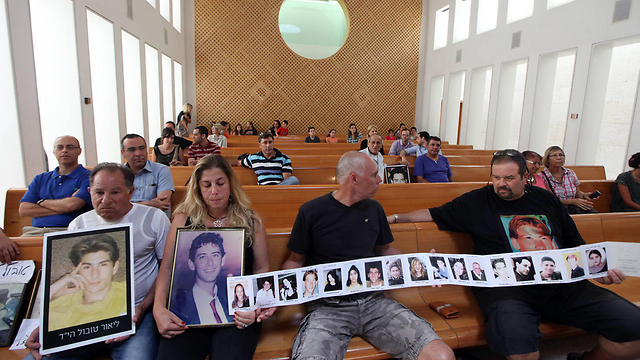 In court. 'I'm not just a number on a list' (Photo: Gil Yohanan)

An official list has yet to be released but some bereaved families claim to have already been informed that their loved ones' killers are about to be freed.

Gila Molcho lost her brother Ian Feinberg while on a European Union mission in Gaza. "Where are the people of Israel? Why am I here alone," she cried. "We are selling ourselves cheap. Every person I've met told me how right I was and how wrong this (the release) is, but no one looks me in the eyes.

"We cannot fight this irrational step alone. I beg of you, come here and say this is unacceptable."

Ron Kerman lost his daughter Tal in a terror attack on a bus in Haifa. "The government promised not to enter into negotiations with preconditions but they gave in and did so with the toughest precondition of all – freeing traitor terrorists," he said. "We've never sunk this low."

Yossi Dor, father of Asaf Dor who was also murdered in the terrorist bombing in Haifa, said: "We're not that naïve to think the Supreme Court will outlay the move. But the court has to send a message today, like in the Zvi Bar case. Let them say that it's 'Kosher but smells of something bad', let them say that it makes no sense that negotiations haven't even started yet and already we are releasing lowlife murderers."

The criteria by which the ministers will determine the prisoners' identities were set by the Shin Bet, which categorized prisoners based on different parameters. The aim is that the identity of those released will bolster Palestinian President Mahmoud Abbas' while also being reasonably accepted by the Israeli public.

The Shin Bet's lists will be presented to the ministers Sunday, and the names will be released to the public after the meeting. The law stipulates that prisoners' names must be published in the Shin Bet website 48 hours prior to the release. President Shimon Peres will probably not have to sign paroles, since most of the prisoners released in the first round are Palestinian citizens—in which case the military grants their release.