Families of victims: Terrorists got rewarded

Amid publication of Palestinians prisoners' to be released list, bereaved families take to streets in protest. 'This is a very exaggerated price so that the world won't say we didn't do the utmost,' says bereaved son

"There will never be peace here, it is very difficult to cope." This is the sentiment of the families of the victims of the 26 prisoners expected to be released as part of resuming peace talks between Israel and the Palestinians. They responded Monday morning with disapproval to the decision to include the killers of their loved ones on the list of those to be released.

Meanwhile, dozens of protesters, including bereaved families and representatives of Almagor, My Israel and Im Tirtzu organizations, are rallying outside the Kirya in Tel Aviv against release.

"We came to try and stop the murderers' release. This is a black day for the bereaved families and citizens," said Avi, a protestor, cousin of Avraham Brumberg, killed in 1981.

"We pay the price of the PM and political echelon's fear, a price of blood and further victims."

Mika, Brumberg's sister-in-law, added that "The PM evaded the responsibility. The terrorists learned and were educated in jail in our expense and now to go back to celebrate in the villages."

The protesters are carrying signs reading "Have we gone mad" and waving pictures of loved ones who were murdered.

At the same time, the Almagor Terror Victims Association turned to the High Court of Justice and requested to issue an injunction to prevent to release of 26 Palestinian prisoners Tuesday.

"I feel horrible," said Bella Beker, widow of the late Moshe Beker, a citrus grower from Rishon Lezion, who was murdered in 1994. The killer, Barbakh Faiz Rajab Madhat who was sentenced to life imprisonment, is included on the list of those to be released. The prisoners are scheduled to be freed from Israeli prisons by Wednesday.

"It feels terrible to release the killer," said Beker's widow. "I would like to know – if to the Prime Minister such a disaster happened, and they released the killer, how he would feel. And for what? For peace?"

Daughter Tzvia Dahan also joined the criticism. She said that the deal that brought Shalit's release included a person who was involved in the murder of her father. "Our pain was great," she recalled, "but I was happy for the Shalit family that their son was back home. Now this is something unclear, what peace will there be? My father loved the State of Israel, he went to work one Friday morning and now we don’t have a father anymore. They killed him in the orchard and now they get rewarded.”

The first installment which brings with it the release of 26 Palestinian prisoners also includes Abu Moussa Salam Ali Atiya, one of the murderers of Holocaust survivor Isaac Rotenberg in Petah Tikva in late 1994. His son, Pinchas, who lives in Azor, said this morning that the family members are hurt and frustrated by the decision of the Ministerial Committee, and especially the fact that it is not within the power of families to change the decree. 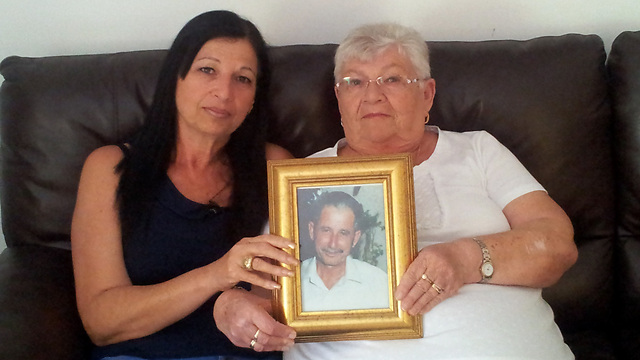 Widow and daughter of Moshe Beker

“This decision is not acceptable to us under any circumstance. We have lived here long enough to know that nothing will come of this gesture," said the bereaved son. "This is a very exaggerated price so that the world will not say that we did not do the maximum, and I do not believe that even among the negotiators, there are those who believe that anything will come of this. I know all the slogans, peace is made with enemies, etc., but the mind cannot fathom why we should make such a significant gesture so that someone on the other side will deign to sit with us.”

Two weeks ago, Matan, the grandson of Rotenberg, published a fuming Facebook status over the move. "Nineteen years ago my grandfather, Isaac Rotenberg, was murdered. Grandfather was a survivor of the Sobibor death camp, survived the uprising, joined the partisans and fought against the Germans. When the war ended, he came to Israel and was deported by the British to a detention camp in Cyprus. With the establishment of the state, he came to Israel, fought and was wounded in the War of Independence. All his life, he worked in construction and built the country. Literally. And doing this work he was murdered.”

Matan added, "During Passover in 1994, at age 67, while he was repairing a floor and was down on his knees, two Arab workers, aged 18 and 23, came into the building, and struck him in the neck with an ax. He was seriously injured and fell into a coma. Days later, he died of his wounds. Today, 19 years after the murder, the government decided to release the killers," he said.

"They are now aged 37 and 42. They have their entire lives ahead of them. They will get a monthly salary from the Hamas government. They will return to their families in the Gaza Strip, be carried on their shoulders, hold up the victory sign, they will be received as heroes and live the rest of their lives happily. Because of the fact that they killed an elderly pensioner with whom they worked. From them I expect this, but I did not expect it from the government I elected. Making a gesture for agreeing to sit and talk. When we reach agreements, then release them," Matan said.

A few days ago, Estee Harris of Ein Vered learned that Salah Ibrahim Ahmad Mughdad, the murderer of her father, the late Israel Tenenbaum, is also set to be released. Tenenbaum worked as a night watchman at the Sironit Hotel in Netanya. He was murdered in June 1993. "We have not received any official notification of the release,” said Esther." My brother lives in the US, and a few days ago he was in an Israeli cafe where he saw the release list. He was the one who told me."

‘Liberation for good cause’

Harris added that she had not mentioned the expected release to her elderly mother. Despite the pain, she hopes that the move may be end up with a positive result.

"I have only one hope, and it is that this release will be for a good cause," Harris said. "Whether it will do something in the right direction. Nothing can return my father. But maybe it will succeed in saving other people. I wish.”