Haredim rallied in Jerusalem and Beit Shemesh Monday morning against the detainment of 14 rioters who tried to prevent construction in a site, which according to them, rests on top of tombs.

Activists affiliated with the extreme organization Atra Kadisha set trash bins on fire in the ultra-Orthodox neighborhoods of Geula and Mea Shearim in Jerusalem.

Some 100 haredim came to the construction site in Beit Shemesh and began rioting. Jerusalem District Police detained 14 rioters, 13 of them on suspicion of disorderly conduct and one for assaulting a police officer.

Following the detainment for questioning of all 14 suspects, the rioters burned garbage containers in Beit Shemesh and blocked one of the city's roads. Large police forces arrived at the scene in an attempt to disperse the rioters, and firefighting crews extinguished the fire. 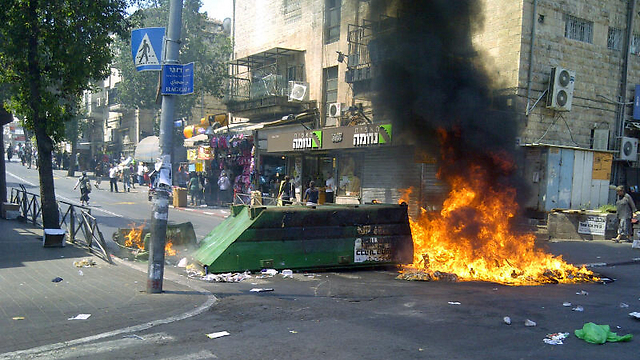 Meanwhile, riots continued in Mea Shearim as well, where trash bins were used to block the neighborhoods' streets for traffic.

A pashkevil (haredi leaflet) published by the Committee for Graves of Israel reads: "As remembered, when construction work on the site began two years ago, the area revealed pits one by one. The site developers tried claiming the area was not on burial caves, but 'grain and oil warehouses'. A year later, after a long delay by the developers, the matter was decided by Badatz (court of justice), which ordered the investigation of three caves." 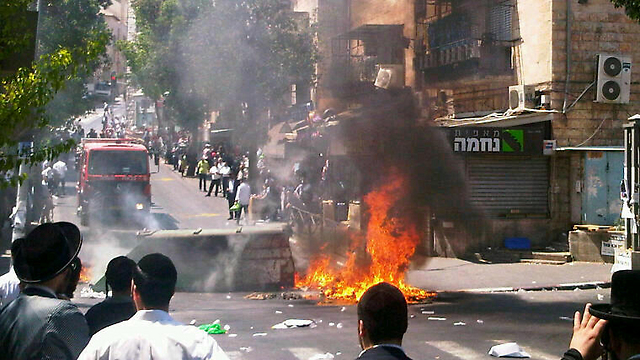 According to the writers of the pashkevil, "the investigation was indeed performed, and all three caves revealed large rolling stones which indicate these are burial caves, and human bones were also found." The pashkevil called on the public to "prepare to protect the burial caves with devotion!"

Rabbis of the ultra-Orthodox sector are divided over whether the construction on the disputed site in Beit Shemesh is permitted by halacha. Atra Kadisha activists have been fighting against construction on the site for two years, claiming the site rests on top of unidentified tombs.

Despite the tumultuous riot, construction work on the site continues as planned and police forces are guarding the area.