Kerry: US views all settlements as illegitimate

US Secretary of State John Kerry said on Monday that Israel's announcement of new settlements in the West Bank and East Jerusalem "were to some degree expected," but reiterated that "The United States of America views all of the settlements as illegitimate."

Meanwhile, Israel's Prime Minister Benjamin Netanyahu on Monday slammed the EU's stance on Jewish settlements in the West Bank, saying they would hamper peace talks with the Palestinians.

"I think Europe, the European guidelines by the EU, have actually undermined peace," Netanyahu said during a meeting with German Foreign Minister Guido Westerwelle. 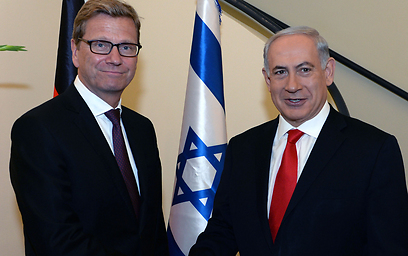 The EU published guidelines last month that will forbid its 28 member states from dealing with or funding any Israeli "entities" in the occupied Palestinian territories, including the West Bank and east Jerusalem. Jewish settlements in the West Bank are illegal under international law.

"They seek an unrealistic end that everybody knows is not going to happen, and I think they stand in the way of reaching a solution which will only be reached by negotiations by the parties, and not by an external dictate."

Israeli and Palestinian negotiators are due to resume US-brokered peace talks in Jerusalem on Wednesday, nearly three years after the last round broke down over the settlements issue.

Israel approved the release of 26 Palestinian prisoners before talks begin, but on Sunday also gave the green light for more than 1,000 new settler homes to be built in the West Bank and in the annexed east Jerusalem, a decision that infuriated Palestinians and also irked the US.

Earlier, Deputy State Department Spokeswoman Marie Harf said that “we do not accept the legitimacy of continued settlement activity.

“These announcements come at a particularly sensitive time and we have raised our concerns with the government of Israel. We are moving forward with our plans. We have always said that this is going to be difficult and there are going to be bumps in the road,” Harf added, reiterating that special envoy Martin Indyk is holding meetings with both sides, which are still actively participating in talks.

In a possitive nod to Israel, Harf noted that the Israeli government is taking “a difficult and necessary step” in releasing Palestinian prisoners ahead of talks.

"Settlements in the occupied territories are illegal, they have been and they continue to be illegal," Eduardo del Buey said.

"Moscow is deeply concerned about the intent to build in occupied Palestinian territories, which are not recognized by Russia and the international community," Lavrov said.

Lavrov further added: "Taking this step on the eve of the renewal of peace talks between Israel and the Palestinians is not effective and does not aid the process."