In a new article, Bloomberg columnist Jeffery Goldberg claims that despite Israel's West Bank settlement construction, US Secretary of State John Kerry managed to grab Prime Minister Benjamin Netanyahu's attention by highlighting growing isolation Israel would face should peace talks fail. In his op-ed, Goldberg slammed Israel's self-destructive" West Bank construction" and quoted a source close to negotiations as claiming Kerry believes Netanyahu fears delegitimization as much as he fears the Iranian threat and wants nothing but to remain in power.

Goldberg claims that both Kerry and local forces are assisting Netanyahu in coming to grips with the potential price Israel will have to pay for its current policies, citing for example a recent visit Netanyahu held with industrialists who fear the products will be boycotted by EU states. 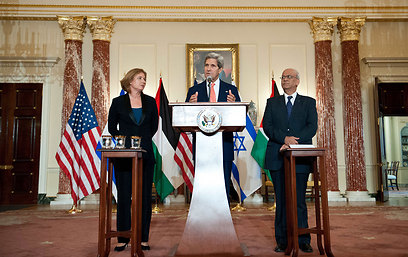 "Kerry, capitalizing on this anxiety, has warned Netanyahu in recent weeks that if the current peace talks bear no fruit, Israel may soon be facing an international delegitimization campaign – in his words – 'on steroids,'" Goldberg wrote.

Citing a source close to negotiations, Goldberg wrote: "Kerry thinks the one thing Netanyahu fears as much as Iran's nuclear program is the growing power of the international movement that seeks to isolate, scapegoat and demonize his country." Regarding Netanyahu himself, Goldberg added almost offhandedly in brackets that "One caveat: Kerry, like most Americans who know Netanyahu, understands that the prime minister's narrowest but most potent fear is of being unseated." According to the Bloomberg article, Netanyahu's fears are connected; a delegitimization campaign would harm Israel's "robust economy" as much as it would "erode Israel's ability to defend itself". The campaign against Israel will widen from "the powerful Arab lobby at the United Nations" to include Western powers as well and would harm Israel ability to promote an attack on Iran as much as "retaliate against sustained attacks from groups such as Hamas and Hezbollah, both of which remain committed to Israel's extermination." 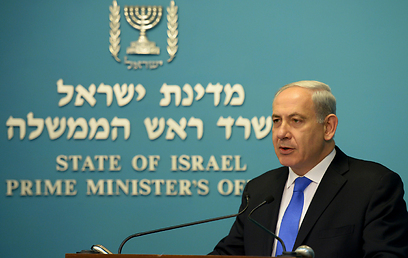 Netanyahu fears isolation as much as Iran (Photo: Avi Ohayon, GPO)
As a result of these processes as well as the recent EU guidelines which ban EU contracts to include West Bank or disputed territories, Goldberg claimed Netanyahu has begun taking small steps towards the center, and "has taken to disparaging some of the politicians to his right as 'insane,'" Goldberg writes, hinting that Kerry might have succeeded in catching Netanyahu's ear. Kerry said on Monday that Israel's announcement of new settlements in the West Bank and East Jerusalem "were to some degree expected," but reiterated that "The United States of America views all of the settlements as illegitimate."

Israel approved the release of 26 Palestinian prisoners before talks begin, but on Sunday also gave the green light for more than 1,200 new settler homes to be built in the West Bank and in east Jerusalem, a decision that infuriated Palestinians and also irked the US.

Earlier, Deputy State Department Spokeswoman Marie Harf said that “we do not accept the legitimacy of continued settlement activity.

“These announcements come at a particularly sensitive time and we have raised our concerns with the government of Israel. We are moving forward with our plans. We have always said that this is going to be difficult and there are going to be bumps in the road,” Harf added, reiterating that special envoy Martin Indyk is holding meetings with both sides, which are still actively participating in talks.

In a possitive nod to Israel, Harf noted that the Israeli government is taking “a difficult and necessary step” in releasing Palestinian prisoners ahead of talks.

"Settlements in the occupied territories are illegal, they have been and they continue to be illegal," Eduardo del Buey said.

"Moscow is deeply concerned about the intent to build in occupied Palestinian territories, which are not recognized by Russia and the international community," Lavrov said.

Lavrov further added: "Taking this step on the eve of the renewal of peace talks between Israel and the Palestinians is not effective and does not aid the process."