In light of reports from Cairo about the killing of 525 people in recent riots, some 150 people of the northern branch of the Islamic Movement in Israel protested Thursday in front of the Egyptian embassy in Tel Aviv, for the second day in a row.

The protesters, including head of the movement Sheikh Raed Salah and his deputy Kamal Khatib, expressed solidarity with the supporters of ousted Egyptian President Mohamed Morsi. Demonstrators waved Morsi photos along with Syrian flags and chanted "stop the killing" and "they are all shahids."

"We are here to deliver an important message to Egyptian authorities: The killing of Egyptian citizens is terror in itself," said Khatib to Ynet. "All the protesters in Egypt going against the overthrow of Morsi are rightfully protesting. He was elected democratically by the Egyptian people who wanted change," Khatib added. 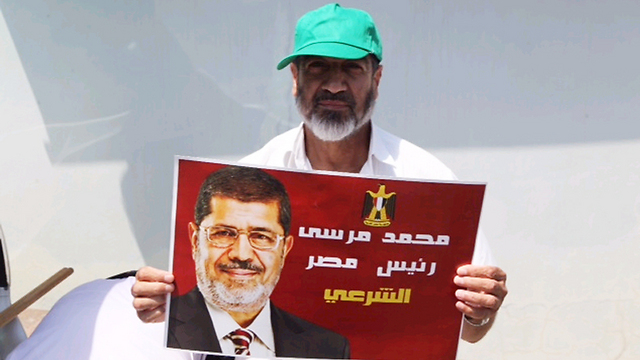 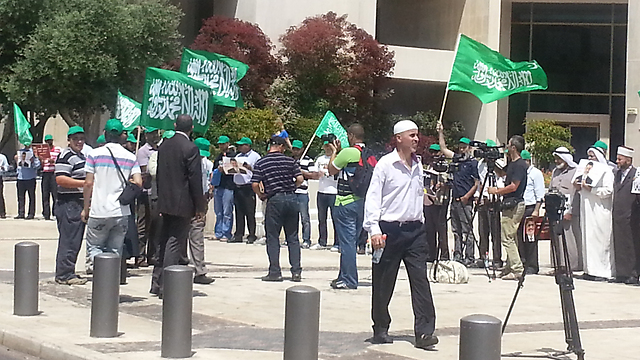 Khatib further added that "all those behind this terror should be punished, mainly Defense Minister Abdel Fattah al-Sisi. We will not be silent and continue to fight as long as the situation in Egypt continues to escalate."

Another demonstrator slammed al-Sisi as well: "He does not work for his people but for his own personal interests. I can say al-Sisi is a criminal, a terrorist and a pig. He should be overthrown immediately."

On Wednesday, dozens of Arab Israelis who are members of the Islamic Movement gathered in the vicinity of the Egyptian embassy in Tel Aviv. Knesset Member Ibrahim Sarsur (United Arab List – Ta'al), who took part in Wednesday's rally told Ynet: Our message is simple; we are here to condemn the army's attacks and the Egyptian coup in general. We are protesting against the bloodshed of those who protested quietly."

Europe fiercely criticized the bloodshed in Egypt. The French president summoned the Egyptian ambassador to the Elysee Palace, and Denmark announced the suspension of aid to Cairo.

Meanwhile, Turkish Prime Minister Recept Tayyip Erdogan called on the UN to convene the Security Council for an urgent discussion of the situation in Egypt.