During a tour of Sweden to celebrate 40 years of the reigning royals, King Carl Gustaf and his wife, Queen Sylvia, visited the neighboring area of the city of Sundsvall. There they were approached by a man who identified himself as an Iraqi refugee, and who gifted them with hand made keffiyehs, the traditional Arab scarf, as a thank you for allowing him to start a new life in Sweden. He then asked them to pose for the camera with the scarves.

Unbeknownst to the royal couple, however, the keffiyehs were adorned with an anti-Israeli inscription: "Al Aqsa is ours and is not their temple." This fact that came to light only after the photo was published, Yedioth Ahronoth reported.

The pictures caused ripples of reaction throughout Sweden. Pro-Palestinian organizations expressed satisfaction with the support the royal couple showed with regards to the Palestinian right over Jerusalem, while others riled at the fact that the King and Queen—even unwittingly—served as a part of Palestinian propaganda. 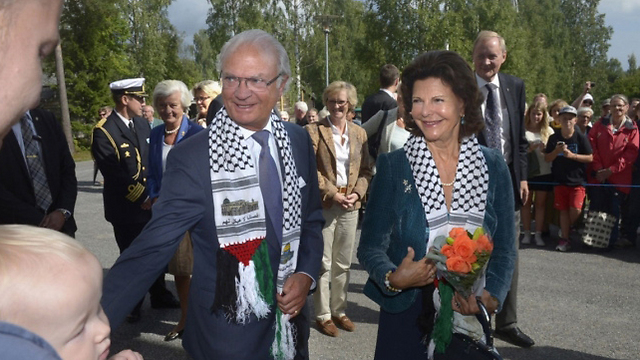 "On their visits to various parts of the land, the royal couple meets many people," said Bertil Ternert, spokesperson of the Swedish royal house, to Yedioth Ahronoth. "In this case, the man placed the keffiyehs on the King and Queen so quickly, that there was no possibility to take the scarves off before the couple posed for the camera. Shortly after the photo opportunity the King and Queen took off the keffiyehs. We want to stress that the acceptance of this gift holds no political statement of any kind."

This is not the first embarrassing incident for King Carl Gustaf. In a book the royal house tried desperately to prevent from being published, his escapades with several lovers were revealed, as well as his frequent visits to striptease clubs.

Along with other incidents, this caused a significant drop in the support of Swedish citizens for the monarchy. About a quarter of Swedes today support revoking the royal institution altogether, and more than half of the country's citizens express desire for the King to pass the throne to his daughter, Princess Victoria.