The Egyptian bloodshed and latest developments in the torn country are the hot topics among Arab publicists, each placing the events in the setting of his or her paper's agenda.

Kuwaiti publicist Saud a-Samcha formed a comprehensive theory on what he dubbed "the Brotherhood and the Zionists' role."

In an op-ed released by the Al-Kabas newspaper he explained that "as a result of current events in Egypt and the Muslim Brotherhood's failure, another issue has been brought to the surface, which is that this movement's aims go far beyond its aspirations for power.

"It was made clear that this group is a despicable arm in a plot – meaning, it expresses the Zionist, Western and American project in the Middle East, aimed at declawing the Arab countries." 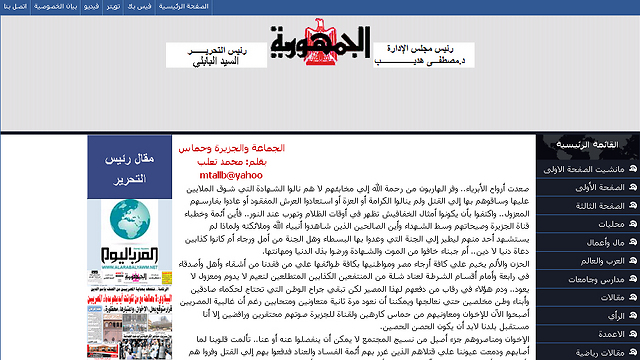 "Where's the heaven promised to the simple folk?" Al-Gomhuria 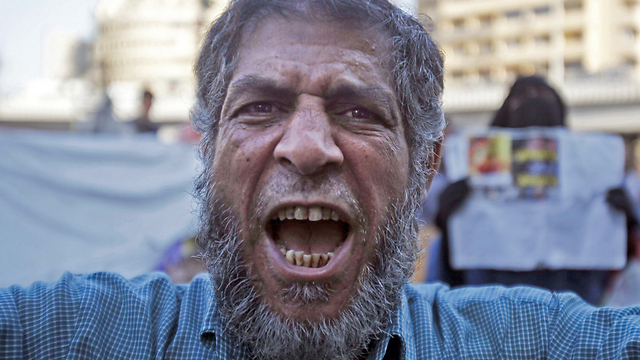 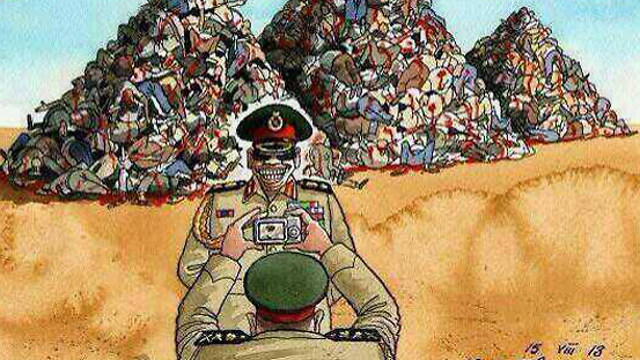 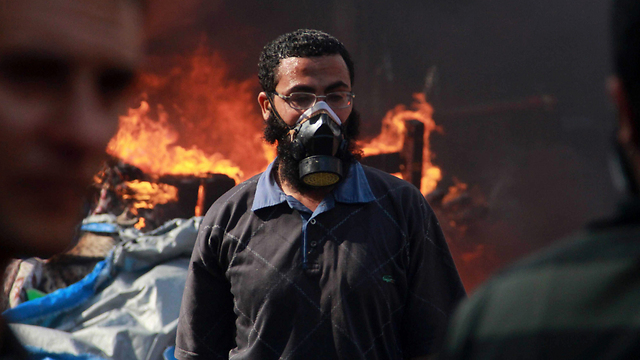 A-Samcha slammed the Brotherhood and wrote that after the fall of "the corrupt regimes" the Islamic movement managed to form an alternative authority and crash the influence of the army.

The Saudi paper al-Watan also bashed the Brotherhood. In an editorial headlined "The Muslim Brotherhood's weapons are a future threat to Egypt," it was written that "Egypt's stability depends on the Brotherhood realizing they're not fit for power and on them relinquishing their arms.

"It's senseless that the Muslim Brotherhood has an armed militia fighting for its interests while the Egyptian army is on the ground defending the homeland."

The editorial's opening paragraph read: "The souls of the innocents rose to the heavens and the fugitives escaped Allah's mercy and went to their hideouts. They did not die as martyrs, like they advertised to the millions.

"They did not attain honor and pride, or return the lost throne, or come back with their deposed knight. They made due by being like bats, which appear at night but flee with the sunrise.

"Where are al-Jazeera's Imam and preachers, where are their screams among the shahids? And where are the honest people who saw God's prophet and his angels? And why did none of them die a shahid and flew to the heaven they promise the simple folk?"

State within a state

Hamas was also not spared the Egyptian newspaper's invective. "Regarding Hamas, Egypt's citizens were willing to die and sacrifice themselves as shahids for it and now don't want anything to do with it after it divided their country and fragmented its people.

"It was made clear to everyone that they (Hamas) are Israel's tools." 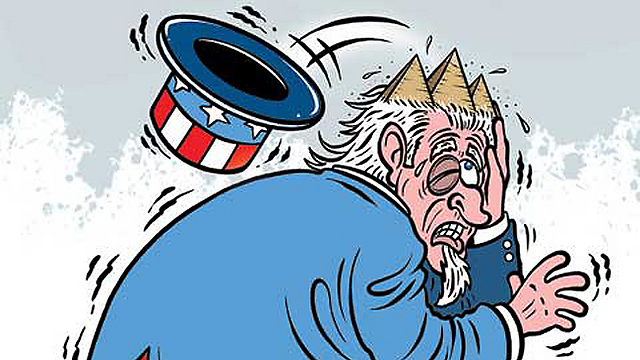 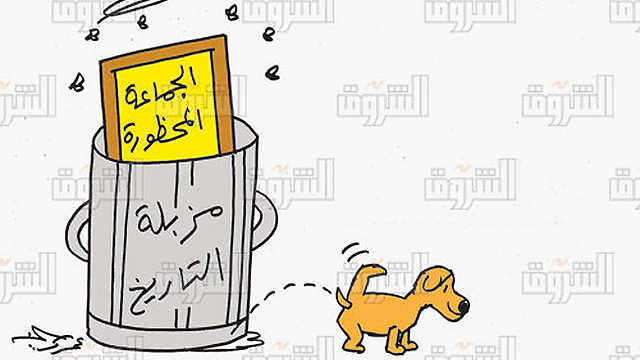 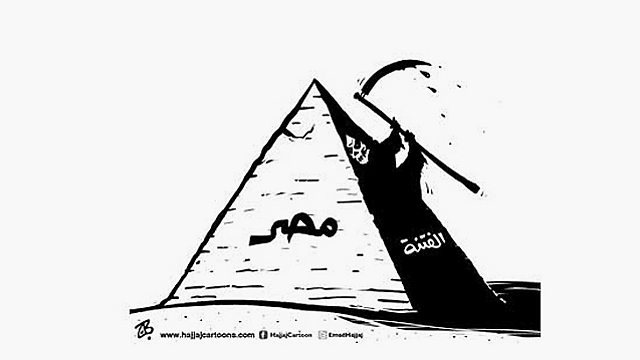 Angel of death on a pyramid. Al-Quds al-Arabi 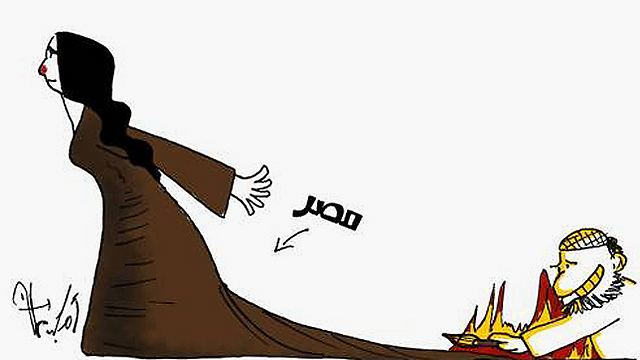 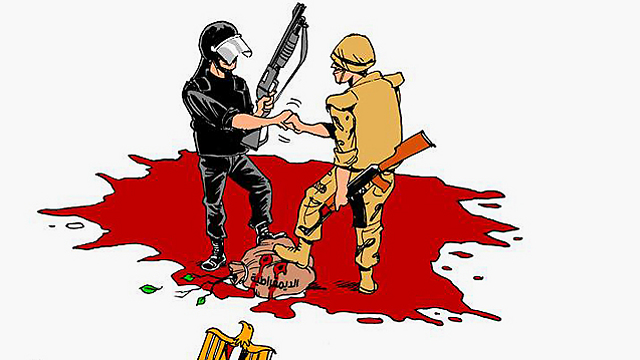 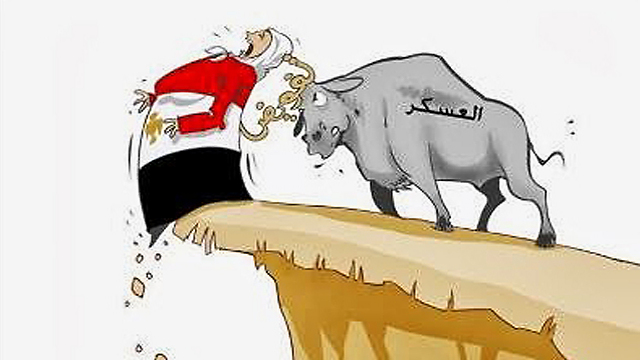 "The weapons they hoarded intensively over recent months surfaced and their trained militias announced a mutiny, causing much mayhem.

"The Muslim Brotherhood wreaked havoc on the ground and terrorized the populace by murdering ousted President Mohamed Morsi's opponents – throwing them from rooftops, abusing their bodies, violating

female demonstrators, abusing male ones with weapons and clashing with the army."

On the other side of the fence, the Muslim Brotherhood's Liberty and Justice party's morning paper claimed that the situation in Egypt and persecution of the movement are part of a plot directed at the Brotherhood.

The world news section in the paper offered extensive coverage of countries such as Morocco and Tunisia in which demonstrations against the Egyptian regime were held.

Another described how Algeria outlawed a protest condemning "the Egyptian massacres."