About 38 Morsi supporters killed in prison riot, some choke on gas. At least 830 die since Wednesday in clashes with army, police

Some 38 Muslim Brotherhood supporters died in disputed circumstances at a prison on Sunday, as the leader of Egypt's powerful army warned he would not tolerate violence, urging Islamists to change course.

Police have rounded up hundreds of Morsi's Brotherhood backers in recent days, in an effort by the army-backed government to end weeks of protests and to stamp their authority on the deeply polarized nation.

The government said 70 members of the security forces were among the dead. 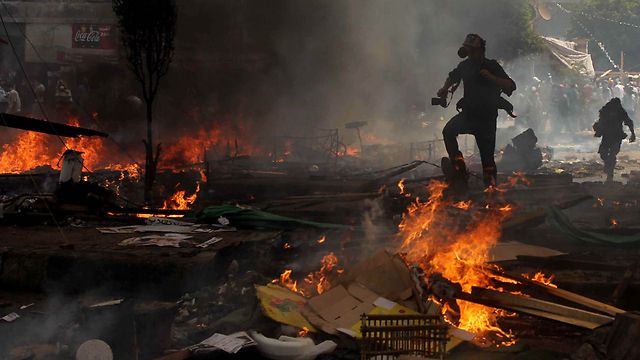 The Interior Ministry said a group of detainees had tried to escape from a prison on the outskirts of Cairo, adding that an undisclosed number had been suffocated by tear gas when police moved in to free an officer who had been taken hostage.

Three sources put the number of dead at 38.

Offering a very different version of events, a legal source told Reuters that men had died from asphyxiation in the back of a crammed police van while being drive to prison.

Vowing to take a firm stand against violence, army chief Abdel Fattah al-Sisi struck an apparently inclusive note in a speech broadcast on television, telling Morsi's supporters: "There is room for everyone in Egypt."

But, in his first public comments since the latest upsurge in violence, he urged them to "revise their national position and realize that legitimacy belongs to the people to give it to whoever they want and take it from them whenever they want."

The Brotherhood, under huge pressure since police stormed its protest camps in Cairo and killed hundreds of its supporters on Wednesday, staged several more marches across the country to demand the reinstatement of Morsi, ousted by Sisi on July 3.

Egypt, the most populous Arab nation, risks lurching into anarchy just 30 months after President Hosni Mubarak's overthrow was hailed as heralding democratic change across a region ruled by autocrats.

Offering a glimpse at previously unreported violence, state news agency MENA said 79 people died on Saturday across Egypt and 549 were wounded. It was not immediately clear how the deaths had occurred. Previously only one person had been reported killed.

The clampdown has brought the military rulers criticism from Egypt's major ally, the United States, and the European Union, but support from wealthy Arab states led by Saudi Arabia, which fear the spread of Brotherhood ideology to the Gulf monarchies.

The interim cabinet met on Sunday to discuss the bloody confrontation, with liberal deputy prime minister, Ziad Bahaa el-Din, advocating an end to a state of emergency declared last week, political participation for all parties and guarantees of human rights, including the right to free assembly.

But his initiative seemed at odds with the stance of Prime Minister Hazem el-Beblawi, who has suggested outlawing the 85-year-old Brotherhood, which would force it underground.

The cabinet meeting lasted about four hours, but ended with no immediate announcement of any major decision.

A middle-ranking security officer, who asked not to be named, said no political proposals or foreign condemnation would be allowed to deflect the suppression of the Brotherhood.

"We have the people's support. Everybody is against them now as they see the group as an armed terrorist organization with no future as a political power," the officer said.

The capital's frenetic streets, unusually empty in the past few days, were returning to normal, although the army kept several big squares closed and enforced a dusk-to-dawn curfew.

Banks and the stock market reopened for the first time since Wednesday's carnage, and shares plunged 3.9 percent.

"As long as we have bloodshed on the streets, it takes away any reason for foreign and regional investors to buy in Egypt," said Amer Khan, director at Shuaa Asset Management in Dubai.

Egypt's new rulers blame the Muslim Brotherhood, which won five successive national polls held after Mubarak's fall in 2011, but which drew charges that it was incompetent and bent on consolidating its own power during Morsi's year in office.

Sisi said: "We will not stand idle in face of the destruction and torching of the country, the terrorizing of the people and the sending of a wrong image to the Western media that there is fighting in the streets."

In calibrated rebukes to the army, the United States has delayed delivery of four F-16 fighters and scrapped a joint military exercise, but it has not halted its $1.55 billion a year in aid to Egypt, mostly to finance US-made arms supplies.

But on Sunday, a bipartisan series of US lawmakers - several of them reversing earlier stances from before the crackdown - said that Washington should suspend the aid.

"For us to sit by and watch this happen is a violation of everything that we stood for," said Senator John McCain, a Republican from Arizona. "There are many areas where we could exercise influence over the generals, and we're not doing any of it, and we're not sticking with our values."

The European Union says it will urgently review relations.

Foreign Minister Nabil Fahmy sought to pre-empt any Western attempt to use aid flows as a lever by saying he would look at all such assistance to see "what aid is being used to pressure Egypt and whether this aid has good intentions and credibility".

He told a news conference Egypt was not seeking to reshuffle its friendships, but would widen them to increase its options.

"The relationship between Egypt and the US has been there for a long time. It has been through ups and downs in the past. We hope things will go back to normal promptly," Fahmy said.

As part of a concerted push to drive home the state's narrative of events, Fahmy's aides distributed a pack of photos said to show Muslim Brotherhood members carrying firearms and wooden staves - and in one picture a black al Qaeda-type flag.

The Brotherhood denies links to the global militant network.

Officials have accused Western media of biased coverage of the unrest, saying they have ignored attacks on police and the destruction of churches blamed on Islamists.

The army crackdown has drawn wide support among Egyptians tired of political turmoil and hard-hit by its economic fallout.

"I tried to sympathize with the Brotherhood but could not," said Hussein Ismail, 32, on holiday from his job in the Gulf, who took part in anti-Morsi protests late last year.

"They stormed our protests at the presidential palace, they hit our women protesters," he said.