As Netanyahu administration fights for deportation of African infiltrators, it employs Eritrean worker to renovate Likud offices. Party's spokeswoman: He has all necessary certifications

While the Likud party boasts of its war against infiltrators from Africa and seeks to deport them from Israel while imposing sanctions on their employment, Yedioth Ahronoth reported that an Eritrean asylum seeker is renovating the Likud offices in Tel Aviv.

Prime Minister Benjamin Netanyahu's administration has declared war against illegal infiltrators from Africa, as tens of thousands of them currently reside in Israel.

Netanyahu proudly announced that his government sealed the border with Egypt and is currently making diplomatic efforts to deport all infiltrators back to their countries or third-party African countries willing to take them in.

Netanyahu's administration is also promoting a bill prohibiting the employment of infiltrators and setting strict sanctions against those who do so. 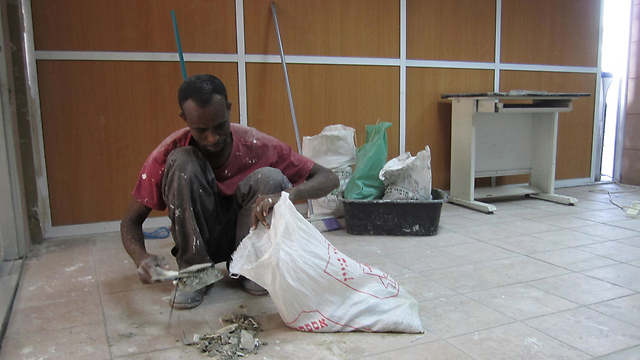 However, it appears that in Israel, the right hand does not know what the left hand is doing. Likud activists who came to Tel Aviv's Metzudat Ze'ev (Ze'ev's stronghold), the party's headquarters, were amazed to see an Eritrean infiltrator among the workers conducting renovation works at the offices. The building is also the home of the office of Likud Chairman Benjamin Netanyahu.

A Likud spokeswoman claimed that the contractor in charge of the renovations employs one Eritrean who has all necessary certifications.

The Population, Immigration and Border Authority (PIBA) stated that as long as there is no alternative to the circumstances of infiltrators with temporary residence permits – the State does not enforce regulations regarding their employment, but soon this state of non-enforcement will change, and will be followed by a clear message to all employers.

Likud activists claimed it was insensitive to hire an African infiltrator instead of ensuring the workers employed on site are Israeli citizens.