In aftermath of Tripoli blasts, anti-Hezbollah accusations mount due to group's Syrian involvement. 'They must withdraw from Syria,' says former PM

Tripoli is rife with suspicions on Friday night, hours after one of the deadliest attacks the northern Lebanese city has known in recent years.

At least 42 people were killed and some 500 wounded in twin blasts outside two mosques, linked to Sunni sheikhs who oppose Syrian President Bashar Assad.

The city has a marked majority of Sunnis, the Muslim sect to which most of Assad's opponents in Syria belong. In recent years many skirmishes erupted between the Sunnis and the Alawite minority in the city, the Muslim offshoot which counts Assad as a follower. 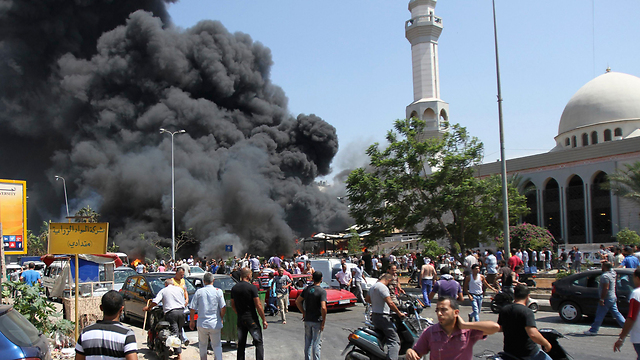 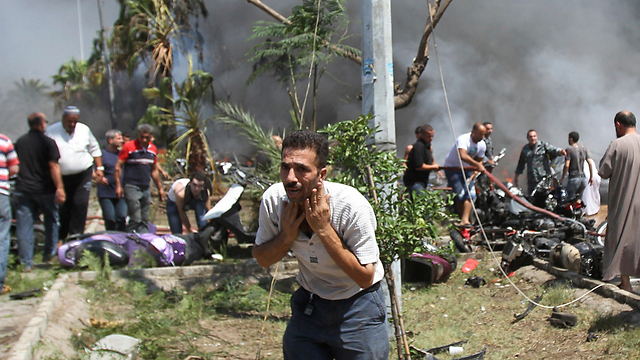 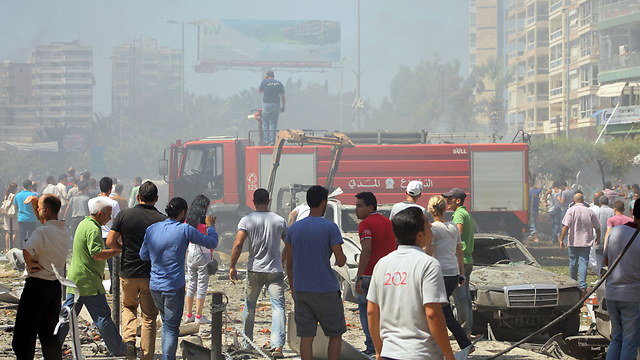 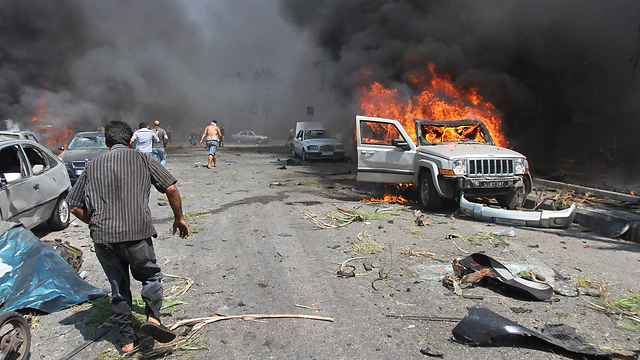 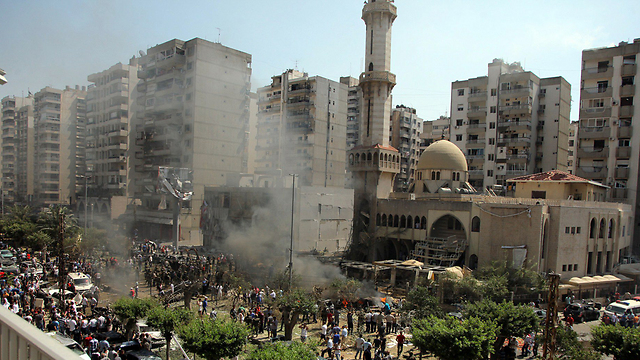 The Lebanese are well aware that the attack is a further example of the seepage of the sectarian violence in Syria into its neighbor, Lebanon, which has a similar ethnic structure.

The Tripoli blasts occurred barely more than a week after the attack on Beirut's southern neighborhood, the Hezbollah stronghold of Dahiyeh, where at least 25 were killed.

Now some leveled accusations at the Shiite Hassan Nasrallah for the Tripoli attacks.

For long months thousands of Hezbollah combatants have been fighting side-by-side with Assad's troops in Syria. After helping the president turn the tide against the rebels and reoccupy many strategic points, the Sunni rebels and their allies vowed revenge.

Following the Tripoli attack on Friday and against the background of the expanding whirlpool of bloodshed into which Lebanon is sucked in, anti-Hezbollah criticism – though still at relatively low tones – is becoming more and more evident.

Fouad Siniora, head of the al-Mustaqbal movement and former prime minister, said following the attack: "Are the attacks meant to divert our attention from what's going on in Syria and from Hezbollah's involvement there or to drive us into internal conflict to the benefit of Israel? The only solution is for

Hezbollah to withdraw from its involvement in Syria. It has no interest to remain there."

The coordinator of the main committee of the Christian Phalangas, Sami Gemayel, warned that Lebanon is being drawn into the Syrian bloodshed, and demanded the country take a step back from Syria.

"First and foremost, Hezbollah must withdraw from Syria, and then we should prevent any organization from fighting there," he said.

Watch the moment of the blast inside mosque

Founder of the Lebanese salafist sect, preacher al-Islam a-Shahal, accused the Assad regime and its allies for the Tripoli blasts and for the attacks on Hezbollah's stronghold in Beirut.

Though he criticized Hezbollah, he portrayed the group as being dragged against its will into Syria: "The Syrian regime performed the Beirut attack to save Hezbollah, which is in big trouble because Shiites have understood they're dying for Assad.

"The Syrian regime acted to spark a civil war in Syria and turned the political struggle into war. He's killing his people and together with the Iranian regime forced Hezbollah into the fray, though there are sensible people inside Hezbollah who oppose it."

Hezbollah has also condemned the Tripoli attacks, and quickly diverted attention to Israel. "The attack is meant to realize the Zionist enemy's aims," Hezbollah tweeted online.

In a statement, the group added that "it's part of an abhorrent plan to plant the seeds of civil war between the Lebanese," and expressed its "full solidarity and unity with our brothers in the beloved city of Tripoli."

The Tripoli blasts occurred around 13:30. Black smoke plumed above the scene and emergency services hastened to the area.

In photographs from the bombing site citizens are seen carrying wounded. "It was like an earthquake, like the whole city shook," said Nadah Falah, who lives near one of the mosques targeted.

Samir Darwish, a 47-year-old contractor, said that he was outside when he heard the first blast and ran toward the fire in Salam Mosque, one of the two mosques targeted.

"I came here and saw the catastrophe. People covered with blood ran in the streets, several bodies lay on the ground. It looked like Judgment Day, death was everywhere."

A while later angry gunmen took to the streets and fired in the air. Near the blast sites men lobbed heavy stones at Lebanese army soldiers who came to investigate.

For the last two years Tripoli has seen several armed skirmishes between pro-Assad Shiite and Alawite groups and Sunni groups who identify with the Syrian rebels.

Lebanon is exemplified by a complex ethnic structure, similar to Syria's, which includes Sunnis, Shiites and Alawites, alongside Christians and Druze.

For this reason, the Syrian civil war, which has the characteristics of a sectarian feud, has a great influence on inter-sectarian relations in Lebanon, raising concerns that it may devolve into another civil war like in 1975-1990.

Despite this belligerent routine, an attack of Friday's magnitude has not been seen in years.

The blasts are the first time in years that a large attack has been carried out against Sunni strongholds in the city. So far, no one took responsibility for the attacks.