US forces move closer to Syria as options weighed

Defense Secretary Hagel confirms report that US is 'positioning forces to be able to carry out different options'. US to increase naval destroyer presence in Mediterranean, source adds as US still awaits final proof of chemical weapons usage, mulls Syrian intervention

The United States on Friday was re-positioning naval forces in the Mediterranean to give President Barack Obama the option for an armed strike on Syria, although officials cautioned that Obama had made no decision on military action. A defense official, speaking on condition of anonymity, said the US Navy would expand its presence in the Mediterranean to four destroyers from three.

US naval forces are moving closer to Syria as President Barack Obama considers military options for responding to the alleged use of chemical weapons by the Assad government. The president emphasized that a quick intervention in the Syrian civil war was problematic, given the international considerations that should precede a military strike.

Photos from the massacre (Photo: Reuters)

Defense Secretary Chuck Hagel declined to discuss any specific force movements while saying that Obama had asked the Pentagon to prepare military options for Syria. US defense officials told The Associated Press that the Navy had sent a fourth warship armed with ballistic missiles into the eastern Mediterranean Sea but without immediate orders for any missile launch into Syria.

US Navy ships are capable of a variety of military action, including launching Tomahawk cruise missiles, as they did against Libya in 2011 as part of an international action that led to the overthrow of the Libyan government.

"The Defense Department has a responsibility to provide the president with options for contingencies, and that requires positioning our forces, positioning our assets, to be able to carry out different options -- whatever options the president might choose," Hagel told reporters traveling with him to Asia.

Hagel said the US is coordinating with the international community to determine "what exactly did happen" near Damascus earlier this week. According to reports, a chemical attack in a suburb of the capital killed at least 100 people. It would be the most heinous use of chemical weapons since Iraqi leader Saddam Hussein gassed thousands of Kurds in the town of Halabja in 1988.

Obama remained cautious about getting involved in a war that has killed more than 100,000 people and now includes Hezbollah and al-Qaeda. He made no mention of the "red line" of chemical weapons use that he marked out for Syrian President Bashar Assad a year ago and that US intelligence says has been breached at least on a small scale several times since.

"If the US goes in and attacks another country without a UN mandate and without clear evidence that can be presented, then there are questions in terms of whether international law supports it - do we have the coalition to make it work?" Obama said Friday. "Those are considerations that we have to take into account."

Obama conceded in an interview on CNN's "New Day" program that the episode is a "big event of grave concern" that requires American attention. He said any large-scale chemical weapons usage would affect "core national interests" of the United States and its allies. But nothing he said signaled a shift toward US action.

US defense officials spoke on condition of anonymity because they weren't authorized to discuss ship movements publicly. But if the US wants to send a message to Assad, the most likely military action would be a Tomahawk missile strike, launched from a ship in the Mediterranean.

The defense official, who was not authorized to speak publicly, said the USS Mahan, a destroyer armed with cruise missiles, had finished its deployment and was due to head back to its home base in Norfolk, Virginia. But the commander of the US Sixth Fleet has decided to keep the ship in the region, the defense official said.

The official stressed the Navy had received no orders to prepare for any military operations regarding Syria.

Obama's senior national security advisers will convene at the White House this weekend to discuss US options, including possible military action, against the Syrian government, another US official said on Friday.

A senior State Department official said no final decisions were expected from the meeting, pending a further review of intelligence on the attack. Secretary of State John Kerry planned to attend via videoconference. The meeting was expected to take place on Saturday.

For a year now, Obama has threatened to punish Assad's regime if it resorted to its chemical weapons arsenal, among the world's vastest, saying use or even deployment of such weapons of mass destruction constituted a "red line" for him. A US intelligence assessment concluded in June chemical weapons have been used in Syria's civil war, but Washington has taken no military action against Assad's forces.

US officials have instead focused on trying to organize a peace conference between the government and opposition. Obama has authorized weapons deliveries to rebel groups, but none are believed to have been sent so far.

In his first comments on Syria since the alleged chemical attack, Obama said the US is still trying to find out what happened. Hagel said Friday that a determination on the chemical attack should be made swiftly because "there may be another attack coming," although he added that "we don't know" whether that will happen.

After rebels similarly reported chemical attacks in February, US confirmation took more than four months. In this instance, a UN chemical weapons team is already on the ground in Syria. Assad's government, then as now, has rejected the claims as baseless. 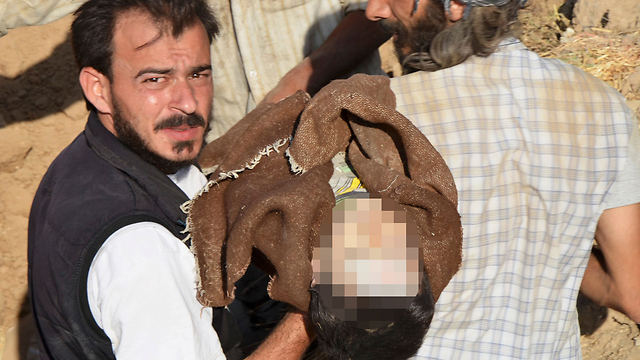 Obama also cited the need for the US to be part of a coalition in dealing with Syria. America's ability by itself to solve the Arab country's sectarian fighting is "overstated," he said.

A security sources, speaking on condition of anonymity, said the assessment was preliminary and, at this stage, they were still seeking conclusive proof, which could take days, weeks or even longer to gather.

Opponents of Syrian President Bashar Assad braved the front lines around Damascus to smuggle out tissue samples from victims of Wednesday's mass poisoning. The Syrian government denies being responsible and has in the past accused rebels of using chemical weapons, an allegation that Western officials have dismissed. 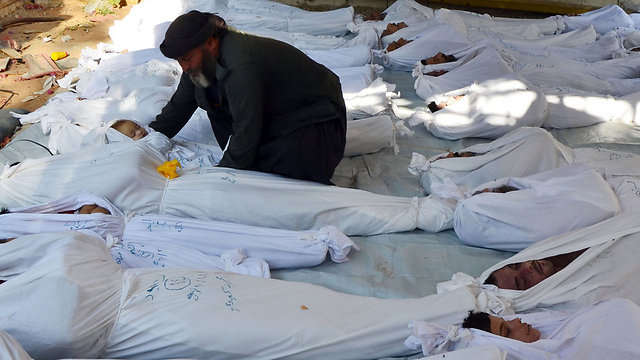 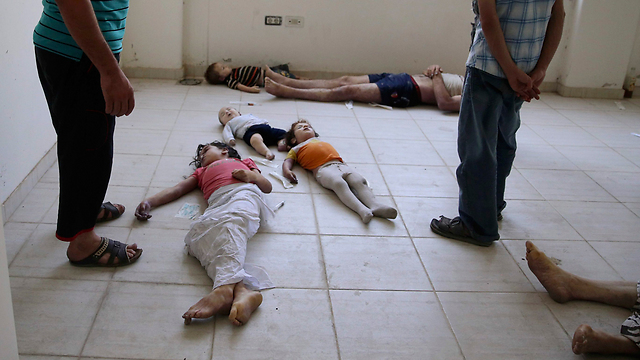 In his first public comments since Wednesday's attack in the Damascus suburbs, Obama called the incident a "big event of grave concern" and one that demanded US attention, but said he was in no rush to get war-weary Americans "mired" in another Middle East conflict.

"If the US goes in and attacks another country without a UN mandate and without clear evidence that can be presented, then there are questions in terms of whether international law supports it," Obama said. "The notion that the US can somehow solve what is a sectarian complex problem inside of Syria sometimes is overstated."

Obama's caution contrasted with calls for action from NATO allies, including France, Britain and Turkey, where leaders saw little doubt Assad's forces had staged pre-dawn missile strikes that rebels say killed between 500 and well over 1,000 people.

White House spokesman Josh Earnest said there was "some evidence" of chemical weapons use in the latest incident, but stopped short of saying an official conclusion was reached. While the West accused Assad of a cover-up by preventing the UN team from visiting the scene, Moscow said the rebels were impeding an investigation. The United Nations released data showing that a million children were among refugees forced to flee Syria, calling it a "shameful milestone."

No 'boots on the ground'

At Thursday's White House meeting, which lasted more than three hours, Obama's aides had a "robust discussion" of the diplomatic and military options available to the president, US officials said.

Among the military options under consideration are targeted missile strikes on Syrian units believed responsible for chemical attacks or on Assad's air force and ballistic missile sites, US officials said. Such strikes could be launched from US ships or combat aircraft capable of firing missiles from outside Syrian airspace, thereby avoiding Syrian air defenses. Kerry, who took part in Thursday's meeting by secure video link, advocated the use of air strikes in White House meetings in early June preceding an announcement of military aid to the rebels, a person familiar with the talks said. Joint Chiefs Chairman General Martin Dempsey argued that such a mission would be complex and costly. The White House on Friday reiterated Obama's position that he did not intend to put "boots on the ground" in Syria, and an administration official said Thursday's meeting also steered clear of the idea of enforcing a "no-fly" zone there.

Another possibility would be to authorize sending heavier US weaponry, such as shoulder-fired anti-aircraft rockets, to the rebels in addition to lighter arms approved in June. But even those limited supplies have yet to start flowing to the rebels.

The top Democrat on the House of Representatives Foreign Affairs Committee urged Obama on Friday to order air strikes against Assad's government.

Representative Eliot Engel cited Obama's statement that the use of chemical weapons by Assad's forces would cross a "red line" and cause the United States to act to halt such violations of international law. "If we, in concert with our allies, do not respond to Assad's murderous uses of weapons of mass destruction, malevolent countries and bad actors around the world will see a green light where one was never intended," Engel wrote in a letter to Obama and obtained by Reuters. With Obama's international prestige seen on the line, a former senior US official said the suspected chemical attack was likely to prompt Obama to use limited force, but he did not expect him to try to topple Assad. "They will feel obliged to do something because the credibility issue is very high here," the former official said, speaking on condition of anonymity. Obama's failure to confront Assad with the serious consequences he has long threatened would likely reinforce a global perception of a president preoccupied with domestic matters and unwilling to act decisively in the volatile Middle East, a picture already set by his mixed response to the crisis in Egypt.

Obama has shown no appetite for intervention. Polls by Reuters/Ipsos and others have shown that most Americans, weary of wars in Iraq and Afghanistan, are increasingly aware of the Syria conflict but remain opposed to US involvement there.