A Palestinian hospital official says three Palestinians were killed and more than a dozen wounded in clashes with Israeli troops in the West Bank.

Rovin Zaed and Younis Jahjouh, both in their 20s, were pronounced dead at a Ramallah hospital. Jihad Aslan died from his wounds shortly thereafter. Another 15 were injured, a hospital official said, speaking anonymously as he wasn't allowed to talk with the media.

Jahjouh was released from prison as part of the Shalit deal. The three died from gunshot wounds inflicted in nearby Qalandiya early Monday.

Border police spokesman Shai Hakimi said officers were on a raid to apprehend a terror suspect, who was released from prison a month ago, when over 1,500 Palestinians poured into the streets and attacked the officers with firebombs and rocks.

Military sources said that the troops used crowd dispersal means, shot at the rioters' legs and were aided by a rescue force who employed similar riot control means. 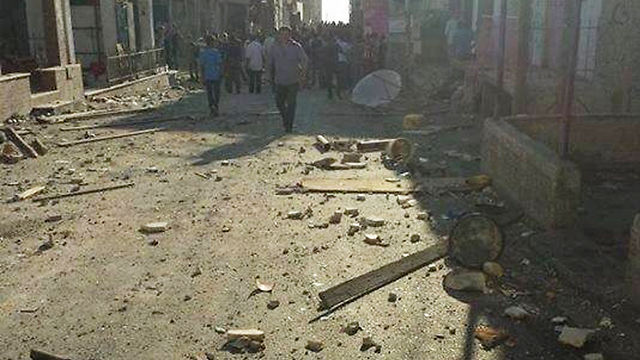 A video posted by Palestinians shows Palestinian youths standing on roof tops at the refugee camp hurling rocks at an IDF jeep that found itself stuck in an alley.

At one point another jeep arrives and lightly bumps into the first jeep and the two continue to sustain rocks and other objects thrown at them. Fortunately, no member of the security forces was hurt.

Watch as IDF comes under barrage of rocks in Qalandiya
X

Watch as IDF comes under barrage of rocks in Qalandiya

Palestinian President Mahmoud Abbas issued a harsh condemnation of the incident saying "the string of Israeli crimes and continued settlement construction represent a clear message as to its true intentions for the peace process."

Nabil Abu Rudeina, Abbas' spokesman, added that the incident will have negative repercussions and demanded that the US intervene to prevent the collapse of international peace efforts.

Palestinian Prime Minister Rami Hamdallah also issued a harsh condemnation in which he held Israel fully accountable for the incident and urged the international community to immediately intervene to stop Israel's 'continued actions" against the Palestinians.

The IDF's Spokesperson's Unit said, "During an overnight operation for the arrest of a suspect in Qalandiya, a riot involving hundreds of Palestinians who attacked the security forces erupted. Early details suggest that an IDF force supporting the troops was trying to rescue them and that fire was opened at the assailants when the situation became life threatening."

The IDF further noted that the suspect, a terrorist, was arrested and turned over for questioning with security forces. "The circumstances behind the incident will be investigated."

Reuters and Itamar Fleishman contributed to this report