The Lebanon-based Azzam Abdullah Brigades, which claimed responsibility for the launching of four rockets toward the Western Galilee region last week issued a statement Tuesday saying the Ziad al-Jarah Battalion fired four 122-millimeter Grad rockets on its behalf toward "the cities of Nahariya and Akko in occupied Palestine."

The statement, in which the terror organization officially claimed responsibility for the attack on northern Israel, said it was carried out "as part of the resumption of the jihad against the Jews. We've frozen the activity for the sake of the blessed Syrian revolution. Numerous developments - mainly the blatant Iranian-Hezbollah intervention in the Syrian revolution - have forced us to freeze our activity against the Jews." 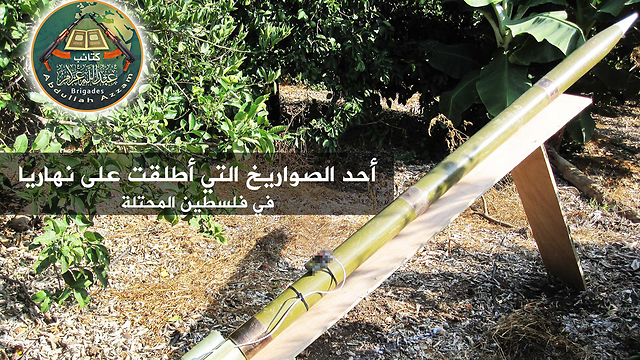 The statement, which was posted on the Twitter account of a radical Salafist cleric who is affiliated with the group, said the "state of the Jews," Iran and Hezbollah have "formed a strategic alliance in the region and coordinated their positions with regards to the Syrian revolution. They worked to undermine the blessed revolution."

The Azzam Abdullah Brigades further mentioned that the "green light given by Israel and the Western countries to Hezbollah in the fight against our people in Syria so that Israel could safeguard its security will not provide it with security. Rather, it will bring it closer to the fire of the jihadi fighters and make it much more exposed to them. In addition, it will make Israel a preferred target for the Sunnis." The al-Qaeda-affiliated jihadist group said its attack on Israel exposed Hezbollah's "false claims regarding its hatred of Israel and the false threats made by the organization's secretary general (Hassan Nasrallah). The attack challenged (Hezbollah) to open fire on Israel."

In the statement, the "Azzam Abdullah Brigades" said the attack gave the "Jewish conquerors an indication of the quality of rockets in our possession. Haifa should be decorated with the most magnificent shrouds to greet our rockets."