Russians evacuated from Syria; UN: Country on 'verge of abyss'

Dozens of Russian citizens, mostly women and children, left Syria on Tuesday aboard a special plane sent by the Emergencies Ministry due to the increased threat of a Western attack on President Bashar Assad's regime, Russian news agency Novosti reported.

According to the report, an Ilyushin Il-62 departed from Latakia, a major port city in Syria’s northwest, with 89 people aboard, including 75 Russian nationals.

According to the report, two Russian Emergencies Ministry’s aircraft landed in Syria on Tuesday bringing over 20 metric tons of humanitarian cargo to local residents.

Also Tuesday, the head of the United Nations refugee agency warned that Syria could be on the "verge of the abyss" as aid workers brace for a likely increase in the nearly 2 million refugees who have already fled the country's civil war.

Antonio Guterres, the head of the Office for the UN High Commissioner for Refugees, called on Syria's neighbors to keep their borders open to accommodate additional Syrians seeking to escape the war. He made the comments during an interview with The Associated Press in Baghdad while on a visit to Iraq. The country's northern Kurdish region has been flooded with tens of thousands of refugees since the middle of the month. 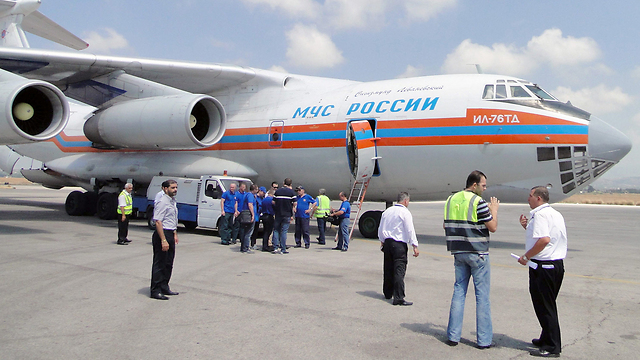 Guterres stopped short of predicting the effect on the refugee crisis if the United States and its allies move ahead with a possible military intervention in the more than two-year-old civil war. But he said his agency is prepared for the conflict to "go on escalating" and called for further support from international donors.

"This is becoming a global threat. With the recent escalation of the conflict, Syria could be on the verge of the abyss," he said. "Obviously we need to be ready for any escalation," he added later. Israeli political sources told Ynet that it is too early to estimate when an American strike might occur, but noted that Israel will not be left in the dark. "It can be estimated that we'll receive a heads-up before military action in Syria," a source said.

Formally, Israeli is keeping silent and Prime Minister Benjamin Netanyahu demanded ministers to coordinate all their public statements on the issue with the information department with the Prime Minister's Office.

However, both Netanyahu and Defense Minister Moshe Ya'alon took the time to issue combative statements to Syria conveying the message: Don't mess with us. "The Iranians are threatening, everyone is threatening," sighed an Israeli source, well-informed on the Syrian issue. "But everyone knows these are false threats. The US and its allies' aim is to find the right balance between military action which will clarify the Americans' stance on what's transpiring in Syria, but at the same time allow Assad to absorb the attack without opening new fronts." White House Spokesperson Jay Carney said on Tuesday that the purpose of a strike in Syria is not to topple Assad, but to convey a message on the use of chemical arms. An Israeli political source noted that "Israel is preparing for the possibility of quiet American action in Syria. We don't foresee we're heading for an all out war and we're not party to this move. However, we should stay alert and see how things unfold."