UK says Security Council 'must have the opportunity' to review findings of chemical weapons inspectors before backing any military action in Syria. Putin, Rohani stress need for 'diplomatic resolution to crisis'

Britain believes that the UN Security Council should see findings from chemical weapons inspectors before backing any military action in Syria, according to a copy of the motion to be placed before the UK parliament released on Wednesday.

"The United Nations Security Council must have the opportunity immediately to consider that briefing and that every effort should be made to secure a Security Council Resolution backing military action before any such action is taken," the motion, to be debated on Thursday, reads.

Berlin said on Wednesday that the leaders of Germany and Britain believe that Syria's government should not to go unpunished for an apparent poison gas attack on its own people.

Chancellor Angela Merkel and Prime Minister David Cameron agreed in a telephone discussion that the use of poison gas in last week's attack near Damascus was now sufficiently proven, the German government said in a statement.

"The Syrian regime must not hope to be able to continue this warfare that violates international law ... Therefore an international reaction is inevitable in the view of the chancellor and the prime minister," it said.

Just four weeks before elections in which Merkel hopes to win a third term, she faces a balancing act in how to respond to pictures of the suspected chemical weapons attack, as German voters are overwhelmingly opposed to military action there.

Meanwhile, Russian President Vladimir Putin and Iranian President Hassan Rohani agreed that the use of chemical weapons is unacceptable and signaled their shared opposition to military intervention in Syria war, the Kremlin said after the leaders spoke by phone.

"Both sides consider the use of chemical weapons by anyone intolerable," Putin's press service said in a statement about the conversation on Wednesday, which it said Iran initiated.

"Taking into account the calls being voiced for external military intervention in the Syrian conflict, they also stressed the need to seek a path to a resolution through exclusively political and diplomatic means," it said.

Fears of a possible US strike against Syria's regime over an alleged chemical weapons attack rippled across the region Wednesday, as about 6,000 Syrians fled to neighboring Lebanon in a 24-hour period and Israelis scrambled for gas masks in case Damascus retaliates against them. UN chief Ban Ki-moon pleaded for more time for diplomacy and to allow UN investigators to complete their work. The experts, wearing flak jackets and helmets, collected blood and urine samples from victims during a visit to at least one of the areas hit in last week's attack. Seven days after chemical weapons were purportedly unleashed on rebel-held suburbs of the Syrian capital, momentum grew toward Western military action against President Bashar Assad's regime.

US leaders, including Vice President Joe Biden, have charged that Assad's government was behind the Aug. 21 attack that Doctors Without Borders says killed at least 355 people. The White House says it's planning a possible military response while seeking support from international partners.

The US has not presented concrete proof of Syrian regime involvement in the attack, and UN inspectors have not endorsed the allegations, although the UN envoy to Syria, Lakhdar Brahimi, said evidence suggests some kind of "substance" was used that killed hundreds. 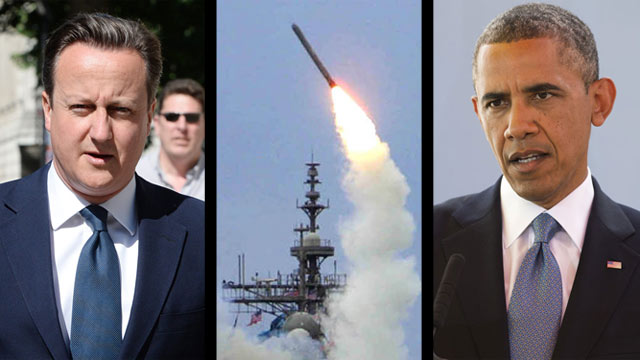 Will UK delay Obama's attack plan? Photos: AFP, MCT, EPA
Two senior Obama administration officials said US intelligence agencies are drawing up a report laying out the evidence against Assad's government. The classified version would be sent to key members of Congress and a declassified version would be made public. One of the officials said the administration is considering more than a single set of military strikes and "the options are not limited just to one day" of assault. "If there is action taken, it must be clearly defined what the objective is and why" and based on "clear facts," the senior administration official said on condition of anonymity because he wasn't authorized to discuss internal deliberations publicly. President Barack Obama is weighing a limited response that focuses on punishing the Syrian government for violating international agreements that bar the use of chemical weapons. Any US military action, officials say, would not be aimed at toppling the Assad regime or vastly altering the course of Syria's civil war, which has already claimed 100,000 dead. As the US, France and Britain push for military action, the UN secretary-general urged restraint to give U.N. inspectors time to finish their investigation, which began Monday. "Let them conclude ... their work for four days and then we will have to analyze scientifically" their findings and send a report to the UN Security Council, Ban said. The UN said the analysis would be done "as quickly as possible." Syria's Ambassador to the UN, Bashar Ja'afari, said he sent Ban a letter demanding that the inspectors extend their investigation to what he described as three chemical weapons attacks against Syrian soldiers in the Damascus suburbs. He said the attacks occurred on Aug. 22, 24, and 25, and that dozens of Syrian soldiers are current being treated for inhaling nerve gases. Ja'afari also blamed the rebels for any chemical weapons attack, saying "the Syrian government is innocent of these allegations."