Hundreds line up for gas masks in Tel Aviv, Haifa

Israel continues to prepare for a Western strike in Syria, despite delays from Britain and the United States. Hundreds of Israelis started their day on Thursday by waiting at the Postal Company ABC masks distribution centers.

Meanwhile, the IDF continues to prepare the home front and has deployed another Iron Dome battery in Haifa, and a Patriot battery in northern Israel.

Karen from Tel Aviv arrived at the distribution center at around 8 am, and her number in line is 400. "I came here to get a mask for my little boy," she explained, "I want to know I did everything I could to protect him. There is no way I'll be putting on a mask and leave him without one."

Another Tel Aviv resident, Gali, also came to collect a mask for her daughter, but decided to go home: "My husband was here yesterday and they told him to come today because there would be a separate line for baby masks. There's no order here, no Postal Company or government representative. How is it possible that we can only come here (for masks)? It's delusional. I'm going home and hoping for the best. If we're still alive in a couple of days, and more venues will open, I will get an (ABC) kit." 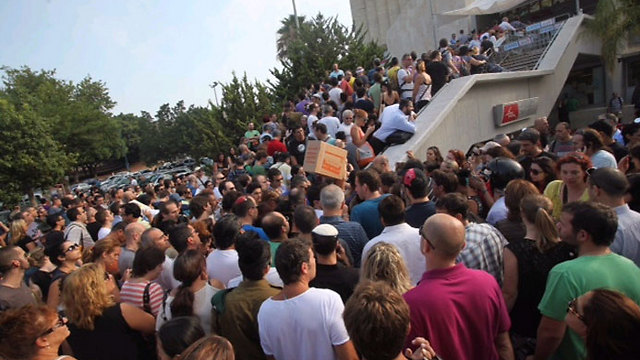 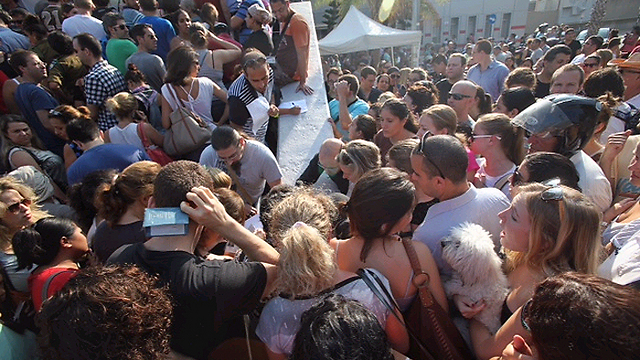 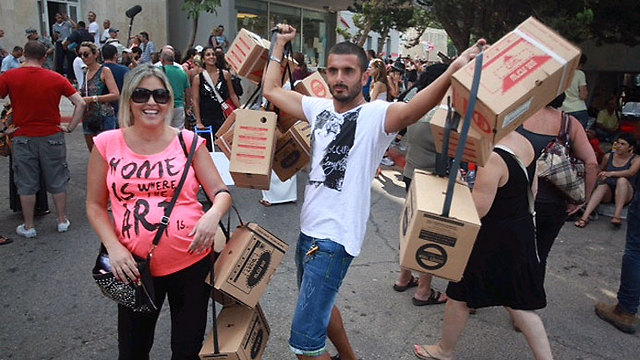 On Wednesday night, a large riot broke out at the Haifa center. Hundreds of people waited at the site for over five hours, when several dozens of them rioted and robbed the center's kits. Similar riots broke out in Jerusalem and central Israel as well.

Police Commissioner Yohanan Danino addressed the situation in Syria and said: "I want to tell all of Israel – we are prepared. I ask the citizens of Israel to not change their plans for the upcoming holidays; we will do everything necessary in order to maintain the routine and security of the people. You have someone to rely on."

During a visit to Jerusalem Police District headquarters, Danino addressed the issue of long waiting at the gas mask distribution centers. "Please treat this situation calmly, orderly stand in line and don't cause panic or violence," Danino asked the public. 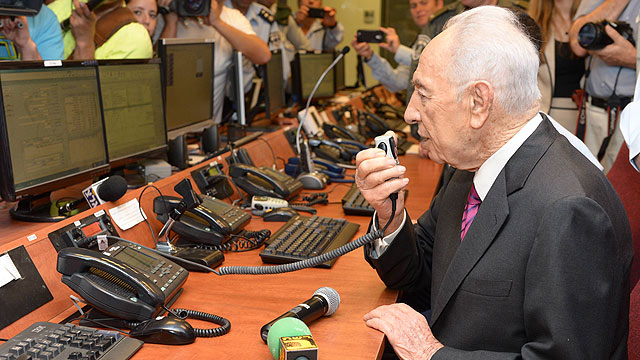 President Shimon Peres also addressed the issue in a visit to the Police HQ: "What happened in Syria is not just a local event, but a crime against humanity and international law, and therefore the responsible world wishes to respond."

Peres added: "Israel was and is not involved in the Syrian civil war, however if they try to hurt us we will respond with full force. Israel has a strong, innovative and powerful army and has defense systems like never before. The reports about an attack against Israel are aimed at creating panic."

The Syrian crisis did not elude the Arab sector, although sources within the Arab community reported that the percentage of those who own ABC kits is low. "Only 55% of the citizens have kits. These days we do no have a distribution station, and I hope the Home Front Command will coordinate with us in order to complete the distribution," said Nazareth Security Officer Mamoun Sabiti.

"The Home Front Command was supposed to open distribution stations, but they surprisingly announced they would not do it. We have many more people who did not get kits yet. We have to take care of them," said Druze Village Kisra-Sumei Security Officer Rukan Alman. Some claim nationalistic reasons for the delay. "I see that the State only worries about the Jewish sector when it comes to distribution of gas masks," said Arab citizen Mahmad Sharif. "Apparently they do not care about the well-being of Arabs in Israel. We have no distribution centers. Most citizens do not have kits. If the war breaks out today, our lives will be in danger."

The IDF Spokesperson's Unit said in response: "The ABC kits distribution stations are open throughout the year in different locations. People can either arrive at the open centers or order a kit with the Israel Postal Company. It should be clarified that there is no change in the guidelines regarding obtaining ABC kits at this stage."