Interfax news agency quoted a source in the armed forces' general staff as saying a missile cruiser and an anti-submarine ship would arrive in the coming days because of the "well-known situation" - a clear reference to the conflict in Syria.

The navy later denied the deployment was linked to events in Syria and said it was part of a long-planned rotation of its ships in the Mediterranean. It did not say what kind of vessels, or how many, were on their way to the region.

Meanwhile it was reported that a team of UN experts left their Damascus hotel for a third day of on-site investigations into apparent chemical weapons attacks on the outskirts of the capital. 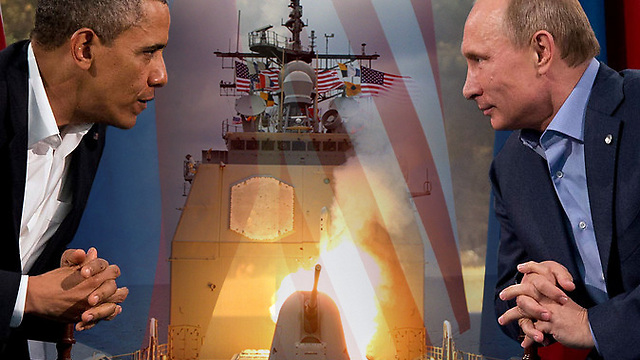 Obama and Putin to face-off in Syria? (Photo: AP, MCT)

Activists and doctors in rebel-held areas said the six-car UN convoy was scheduled to visit the scene of strikes in the eastern Ghouta suburbs.

The UN chemical weapons inspection team in Syria will continue its investigations until Friday and plans to leave on Saturday morning, UN Secretary-General Ban Ki-moon said on Thursday.

Ban, visiting Vienna, said he had spoken to US President Barack Obama on Wednesday about the situation in Syria.

"They (the inspection team) will continue investigation activities until tomorrow, Friday, and will come out of Syria Saturday morning and will report to me," Ban told reporters in the Austrian capital.

The initial Interfax report had made clear that the aim was to beef up the navy's presence and not to replace the ships in the Mediterranean. The reason for the discrepancy in the two reports was not immediately clear.

The United States accuses Syrian government forces of carrying out last week's chemical weapons attack and has said it is repositioning its naval forces in the Mediterranean.

Russia, President Bashar Assad's main international ally, says it opposes any military intervention in Syria and that it has no plans to be drawn into any conflict. It says there is no proof that Assad's forces carried out the attack.