WASHINGTON - US President Barack Obama is willing to move ahead with a limited military strike on Syria even while allies such as Britain are debating whether to join the effort and without an endorsement from the United Nations Security Council, The New York Times quoted senior administration officials as saying Thursday.

Although the officials cautioned that Obama had not made a final decision, all indications suggest that the strike could occur as soon as UN inspectors, who are investigating the Aug. 21 chemical attack that killed hundreds of Syrians near Damascus, leave the country. They are scheduled to depart Syrian capital on Saturday.

According to The New York Times, the White House is to present its case for military action against Syria to Congressional leaders on Thursday night. Administration officials assert that the intelligence will show that forces loyal to President Bashar Assad carried out the chemical weapons attack in the suburbs of Damascus.

The intelligence, officials briefed on the presentation said, does not link Assad directly to the attack, but the administration believes that it has enough evidence to carry out a limited strike that would deter the Syrian government from using these weapons again.

Obama, officials said, is basing his case for action both on safeguarding international standards against the use of chemical weapons and on the threat to America’s national interests posed by Syria's use of those weapons.

According to the report, administration officials said that threat was both to allies in the region, like Turkey and Israel, and to the United States itself, if Syria's weapons fell into the wrong hands.

The New York Times said Obama's rationale for a strike creates a parallel dilemma to the one that President George W. Bush confronted 10 years ago, when he decided to enter into a far broader war with nearly 150,000 American troops in Iraq — one that the Obama administration says differed sharply from its objectives in Syria — without seeking an authorizing resolution in the United Nations. 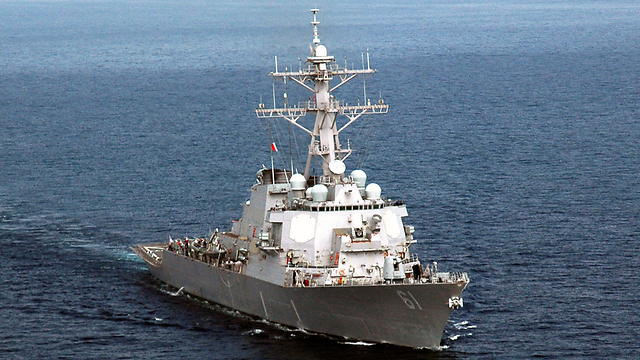 US destroyer in Mediterranean (Photo: Reuters)

In that case, they said, Bush was seeking to overthrow the Iraqi government. In this one, they argue, he is reinforcing an international ban on the use of chemical weapons, and seeking to prevent their use in Syria or against American allies, including Turkey, Jordan and Israel.

Russia and China, Syrian allies and permanent members of the Security Council, have so far refused to support any military action against Assad. But Obama, his aides say, has reached what one called "a pragmatic conclusion" that even the most ironclad evidence that chemical weapons were used would not change Russia’s objections.

"We have been trying to get the UN Security Council to be more assertive on Syria even before this incident," Benjamin J. Rhodes, the deputy national security adviser for strategic communications, said Thursday in an interview with The New York Times. "The problem is that the Russians won’t vote for any accountability."

Meanwhile, British Prime Minister David Cameron lost a vote endorsing military action against Syria by 13 votes, a stunning defeat for a government which had seemed days away from joining the US in possible attacks on Syria.

Thursday evening's vote was nonbinding, but in practice the rejection of military strikes means Cameron's hands are tied. In a terse statement to Parliament, Cameron said it was clear to him that the British people did not want to see military action.

The meeting lasted for just under an hour. US, British, French, Chinese and Russian diplomats declined to comment to reporters after the meeting. One diplomat said it was not clear why Russia had called for the meeting and nothing new was raised. "There's no further P5 (permanent council members) meeting scheduled but that could change," a diplomat told Reuters on condition of anonymity. Russian diplomats declined to comment on the meeting apart from the fact that it had ended. Britain, China, France, Russia and the United States held an inconclusive meeting on Wednesday on a draft Security Council resolution that would authorize "all necessary force" in response to the alleged gas attack. The five permanent members have veto powers on the Security Council. Russia, Syria's main arms supplier, as well as China, have already vetoed three resolutions condemning Syrian President Assad's government and threatening it with UN sanctions. Russia has made clear it opposes any military action in Syria and suggested the rebels may have launched last week's attack that killed hundreds of people in suburbs east of Damascus. Syria has also blamed the rebels and urged Ban to investigate reports of rebel gas attacks. So far, Britain has not submitted its draft resolution to the full 15-nation Security Council. Diplomats told Reuters that it was not clear if a resolution would be put to a vote in the council given that Russia would almost certainly veto anything authorizing the use of force against Syria.