Syria has rejected the declassified US intelligence report presented by State Secretary John Kerry in a forceful speech, followed by President Obama's statement that the Assad regime must be accounted for its crimes.

The Syrian Foreign Ministry termed the accusations "lies and baseless," adding that Kerry's charges were a "desperate attempt" to justify a military strike against Syria.

The Syrian Information Minister Omran a-Zoubi told reporters that "The Syrian regime did not use chemical weapons anywhere. This is just an excuse and any other excuse could have been made to attack Syria. 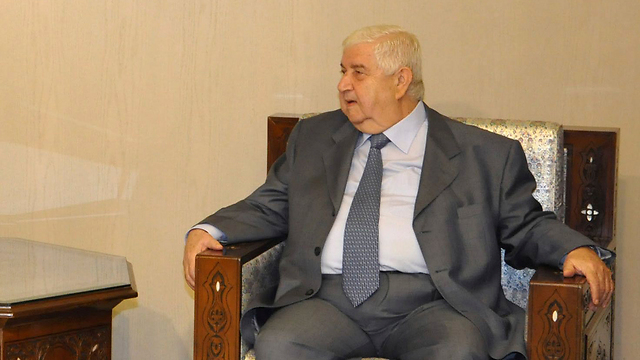 Regarding the atmosphere in Syria he said that "The Syrian leadership is content and isn't worried."

Conversely, leader of the Free Syrian Army, General Salim Idris told a Lebanese TV channel after Kerry's speech that "the Syrian regime's soldiers are starting to feel the danger of a military intervention and Syrian officers have fled their bases."

Idris estimated in the interview that Assad will use chemical weapons again. Syrian opposition elements reported that the Syrian military evacuated the military airport in the city of Tadmor in the Homs district.

A Syrian state TV channel cited a senior official with the Syrian Foreign Ministry who responded to the American intelligence report and said that "What Kerry presented is based on old versions released by the terrorists over a week ago. This is a fabricated, false report."

Earlier, Syria's ambassador to Lebanon, Ali Abd al-Karim, told the Hezbollah 's al-Manar network that "Damascus will respond to any attack against Syria, no matter its type and magnitude."

The Syrian ambassador added that "Israel is right to be worried. A limited attack against Syria doesn't change the power balance in the area and will have a negative influence on the US and its allies."

Meanwhile, the Turkish and British prime ministers voiced their support for the American stance. Recep Tayyip Erdogan, Turkey's PM, said that any international military intervention against Syria should be aimed at bringing an end to the rule of Syrian President Bashar Assad.

"It can't be a 24 hours hit-and-run," Erdogan told reporters at a reception in the presidential palace in Ankara. "What matters is stopping the bloodshed in Syria and weakening the regime to the point where it gives up," he said

Erdogan, one of the Assad regime's harshest critics, cited the NATO operation against Yugoslavia during the Kosovo war as an example.

"If it is something like the example of Kosovo, the Syrian regime won't be able to continue," he said.

Erdogan said he would have bilateral discussions with Obama and Russian President Vladimir Putin during the G-20 summit next week.

While Erdogan is leading Turkey relentlessly toward a military operation in Syria, British Prime Minister David Cameron, who suffered a burning defeat in parliament when it decided against a strike in Syria, tried to relate that the British will aid the effort as much as they can without active participation.

Cameron's speaker noted that the PM spoke with President Obama, and the two agreed that had agreed British-US cooperation would continue, after Britain's decision not to support military action in Syria.

Cameron said Obama stressed his appreciation of the strong friendship between the two leaders and the "strength, durability and depth of the special relationship between our two countries".