Syria says it expects an attack 'at any moment'

"We are expecting an attack at any moment. We are ready to retaliate at any moment," said the Syrian security official, who wished to remain anonymous.

The departure of the UN inspectors has opened a window for a possible US strike after President Barack Obama on Friday gave his clearest indication yet that a military intervention was imminent.

He said his administration was looking at the possibility of a "limited, narrow act," while stressing no final decision had been taken on whether to unleash military strikes against Bashar Assad's regime.

The UN inspectors are due to report straight back to United Nations chief Ban Ki-moon and detail their conclusions on whether a poison gas attack actually did take place on August 21, based on samples collected on site.

The Syrian regime has denied being responsible for the alleged incident - which Washington says killed more than 1,400 people.

Defense officials said late on Friday that a sixth US warship is now operating in the eastern Mediterranean, near five US destroyers armed with cruise missiles that could soon be directed against Syria as part of a "limited, precise" strike.

They stressed that the USS San Antonio, an amphibious ship with several hundred US Marines on board, was in the region for a different reason and there were no plans to put Marines on the ground as part of any military action against Syria.

One of the officials said the San Antonio's passage into the Mediterranean was long-planned, but officials thought it prudent to keep the ship in the eastern Mediterranean near the destroyers given the current situation.

"It's been kept there as a precaution," said one of the officials, who was not authorized to speak publicly. 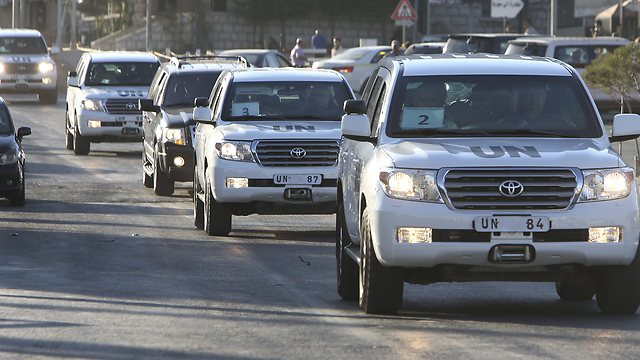 The San Antonio transited through the Suez Canal on Thursday from the Red Sea, and received new orders on Friday to remain in the eastern Mediterranean, near the destroyers, according to defense officials. It is one of three ships that are carrying 2,200 Marines who have been on a six-month deployment in the region around the Arabian peninsula.

The Obama administration released evidence on Friday that it said demonstrated the Syrian government had used chemical weapons against civilians. It made clear on Friday that it would punish Syrian President Assad for the "brutal and flagrant" attack that it says killed more than 1,400 people in Damascus last week.

The five destroyers are each carrying an estimated three dozen or more Tomahawk missiles for a combined total of about 200 missiles, according to defense officials.

Byron Callan, analyst with Capital Alpha Partners, projected that a limited Syrian strike would use about 200 to 300 Tomahawk missiles, compared to about 221 used in the Libya operation.

They cited a debate within the Obama administration about striking the right balance between a limited cruise missile attack aimed at delivering a message about chemical weapons, and a broader attack that could be seen as a strong insertion of the United States into the Syrian civil war.

Military and civilian officials have expressed the need for caution to avert a cascading military conflict that could have repercussions throughout the region. Some officials have cautioned that even an attack on military helicopters could be seen as part of a US campaign to disable the Syrian military.

Retired Admiral Gary Roughead, who served as chief of naval operations during the 2011 strikes on Libya, said any strike on Syria would have to be targeted precisely to do the maximum amount of damage to Syrian military headquarters and other key sites - and to avert the possibility of retaliatory action.

"If you're going to try to shape events, you really need to hurt them," said Roughead, now a visiting fellow at Stanford University's Hoover Institution. "You would have to do something that would diminish the effectiveness of the Syrian military and that would be their command and control, perhaps their leadership, and then their ability to control air space."