The White House is prepared to rework language in a draft resolution authorizing military force in Syria to address concerns from lawmakers, an administration official said on Monday.

The official said the administration was open to changes "within the parameters that (the) president has previously explained."

US Senator John McCain said on Monday that a vote by the US Congress against President Barack Obama's proposal for using military force in Syria would be catastrophic. 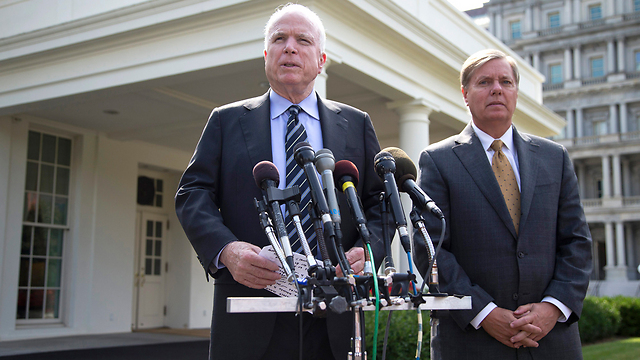 "If the Congress were to reject a resolution like this after the president of the United States has already committed to action, the consequences would be catastrophic," McCain told reporters after a meeting he and Senator Lindsey Graham had with the president at the White House. McCain, a Republican, said he was encouraged by the meeting but that the administration still had a "long way to go" to get the resolution passed.

Graham added: "A degrading strike limited in scope could have a beneficial effect to the battlefield momentum. There will never be a political settlement in Syria as long as Assad is winning."

Obama's first proposal, released on Saturday by the White House, authorizes the president to use the armed forces "as he determines to be necessary and appropriate in connection with the use of chemical weapons or other weapons of mass destruction in the conflict in Syria."

It also explicitly allows military action to deter or prevent the transfer of those weapons into or out of Syria.

Despite the White House's repeated assurances that US action in Syria would not involve "boots on the ground," many lawmakers want any authorization to specify that no US forces would be sent into Syria.

Most said that, if there were any military action at all, it must be restricted to missile strikes into Syrian territory or aid to rebels fighting to oust Assad.

President Bashar Assad said Monday in an interview with La Figaro that Syria would retaliate if France takes part in foreign strikes on his forces, while Paris said it had intelligence proving Assad had ordered chemical attacks and was determined to punish him. 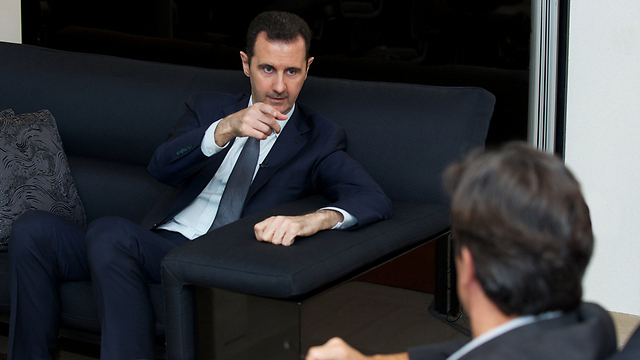 Assad said it would have made no sense to use chemical weapons in an area where his troops were also fighting.

"Those who make accusations must show evidence. We have challenged the United States and France to come up with a single piece of proof. Obama and Hollande have been incapable of doing so," said Assad, according to extracts of the interview published on Monday.

"I have full faith in President Obama's moral and operational stance. I recommend patience," President Shimon Peres said in a radio interview Monday, seeking to calm a nervous public. "I am confident that the United States will respond in the right way to Syria."

Israeli leaders have been careful about voicing their thoughts about what the US should do, wary of creating any perception that they are meddling in either American politics or the civil war in neighboring Syria.

On Sunday, Prime Minister Benjamin Netanyahu rebuked a junior Cabinet minister who publicly criticized Obama. In a radio interview, Housing Minister Uri Ariel compared the American foot-dragging to Western inaction during the Holocaust. He also said American inaction sent a message to terrorists and hostile governments that there was no price to pay for using nonconventional weapons.

Netanyahu ordered the Israeli cabinet to keep their opinions to themselves, stressing the need to behave "responsibly" at such a sensitive time.

But in a meeting last week with the visiting French foreign minister, Netanyahu himself called for a tough response to Syria, saying the world's reaction to the use of chemical weapons would have deeper implications for the international handling of Iran's nuclear program.

Israel, along with many Western countries, believes Iran is pursuing nuclear weapons, and Netanyahu has repeatedly raised concerns that international pressure to curb the Iranian nuclear program has been insufficient.

"Assad's regime has become a full Iranian client and Syria has become Iran's testing ground," Netanyahu said. "Now the whole world is watching. Iran is watching and it wants to see what would be the reaction on the use of chemical weapons."

For this reason, many Israelis reacted with disappointment after Obama announced over the weekend that he would seek a congressional vote before a use of force against Assad. Israeli newspapers and commentators criticized the American leader for appearing weak and indecisive.

"You can't count on someone who isn't sure of himself," said Hanna Tzikli, a resident of northern Israel.

Israelis have expressed their desire for American action with a mixture of moral and strategic concerns. Watching civilians die from poisonous gas is painful in a country built on the ashes of the Holocaust, in which the Nazis sent countless Jewish victims to their deaths in gas chambers.

It has also sharpened concerns that Assad might one day use these weapons on Israel. Special gas-mask distribution centers have been flooded with nervous people in recent days seeking to get their protective ABC kits.

"If he used chemical weapons against his own people, he'd have no problem using them against others," said Oded Eran, a senior researcher at the Institute for National Security Studies, a Tel Aviv think tank.

Still, the operating assumption appears to be that a US strike would not necessarily precipitate a Syrian reprisal against Israel. With Assad believed to be gaining the upper hand in the war, Israeli decision makers suspect he would be careful not to weaken his military by opening up a new front against a strong rival.

MK Nachman Shai said American credibility was on the line since Obama long ago said that Syria's use of chemical weapons was a "red line" that could not be crossed. Similarly, Obama has promised Israel that he will never allow Iran to acquire nuclear weapons.

"We are watching America carefully. We rely on America on all fields of life, especially now when it comes to Iran," said Shai, a former chief military spokesman who now sits on parliament's Foreign Affairs and Defense Committee. "We need to know that on D-Day we have America next to us."

Shai, a member of the opposition Labor Party, nonetheless praised Netanyahu's handling of the crisis so far. While Israel has a clear interest in how America responds in Syria, he said it is essential Israel avoid any perception of interfering in American decision-making.

Israel has not taken sides in the Syrian conflict, and Shai said it has no interest in doing so now. He said any American attack should deliver a "strong message" to Assad but should not seek to change the course of the fighting or oust the Syrian leader.

If Israel could be guaranteed that Assad would be replaced by a stable government that controlled the entire territory and the myriad of groups operating within it, it may be inclined to wish for his ouster, Eran said. But even though Syria and Israel are bitter enemies, the Assad family has kept the Israel front quiet for nearly all of the past 40 years – and many Israelis view Assad, a known quantity, as preferable to the Islamist factions, some of which are affiliated with al-Qaeda , trying to oust him.

"It's hard to identify who are the good guys and who are the bad guys. Probably they are all bad guys," Shai said. "The interest of Israel is that no one will attack Israel and we will not be involved in any way."