Hundreds of IDF ‘lone soldiers’ with no family in Israel, forced to spend holidays, weekends alone in their bases. Ahead of High Holidays, The Fellowship, El Al, Association for Wellbeing of Soldiers join forces to bring together lone soldiers, their families living abroad. You can help, too

A. immigrated to Israel several years ago from one of the former Soviet Union countries because he wanted to serve in the IDF . He enlisted and was accepted into a combat unit all by himself, because he immigrated without his family, which remained in the Ukraine. As a lone soldier, he spent many weekends and holidays at his base, because he had nowhere to go.

Today A. is a company commander, with quite a few lone soldiers serving under him. Having experienced the difficulties first-hand, he is well aware of what his soldiers are going through and invests efforts to make them feel that they are not alone, and that they have someone who can help them cope with the loneliness, and also with the economic difficulties that arise at times.

A. is not alone. Many IDF soldiers are defined as lone soldiers, or soldiers in need. “I often hear of commanders and officers who take money out of their own pockets and place it, undetected, in the bag of a soldier they know needs a few more shekels to buy food for his family,” says Rabbi Yechiel Eckstein, the President of The Fellowship.

Eckstein founded The Fellowship some 30 years ago, when he lived in the US. The organization’s goal was to connect between Evangelical Christians and Jews, and to help those in need to the extent possible. The name of the organization was ‘International Fellowship of Christians and Jews’. About 12 years ago Eckstein realized his personal dream and immigrated to Israel, where he established The Fellowship, which continues to take action to secure the support of the Christian world in Israel. 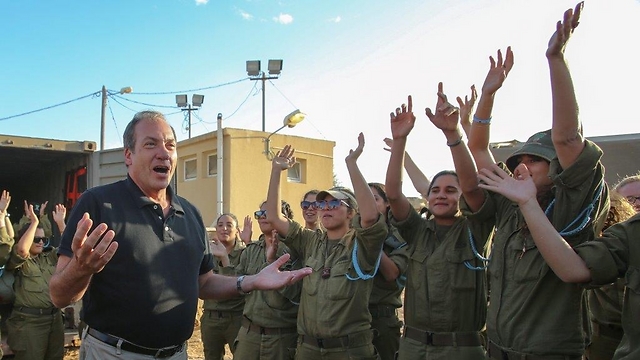 He finds it difficult to put into words why he has chosen this way of life. From his viewpoint, it is a personal mission, to support and benefit others – the citizens of the State of Israel. The ties to the country, he says, are an inseparable part of his life. “I know that all my life I wanted to immigrate to Israel. My father was born in Jerusalem, I studied in a Yeshivat Hesder here and it was very clear to me that at some stage of my life I would make aliyah and make Israel my permanent place of residence.”

But his burning mission to help Israel’s soldiers is even stronger than his connection to Israel. “I remember that when I was studying here in Israel (between the years 1968 and 1970) in the Yeshivat Hesder – which combines religious studies and military service – I woke up one morning and went to the dining hall, and found that only my American friends were there. I quickly understood that during the night the Israeli guys were taken to take part in a military campaign.”

“I remember that moment, when I stood in the dining hall and the situation sunk in. It reminded me of the story about the (biblical) Tribe of Reuben and half the Tribe of Menashe, who wanted to remain on the eastern side of the Jordan River, and Moses said to them: ‘Should your fellow Israelites go to war while you sit here?’ I found it shocking, the feeling that everyone joins the army and risks their life to make the State of Israel and its inhabitants secure, and here I am, eating breakfast and studying in the Yeshiva while my brothers are going out to war. I then knew that this was my mission in life – this, and immigrating to Israel.”

At the age of 50 he understood that it was now or never and made aliyah.

To respect and to live in dignity

In Eckstein’s eyes, the IDF and the soldiers are the most important asset the State of Israel has, when it comes to its security. The thought of soldiers in need of assistance is what drives him to take action. To his regret, the economic situation among members of the Israeli society also influences the soldiers individually. “The cuts in budgets that are intended for citizens, the poverty that reaches sectors that previously enjoyed economic security – all these affect the soldiers as well, because their families suffer hardship, and the soldiers need to help.”

Eckstein tells of a soldier, a son of an Ethiopian family, who deserted the army. They searched for him and arrived at his home, and the military police wanted to arrest him. “But then it became evident that he deserted to give his family the money he had in his wallet, because they had run out of money and had not eaten anything in two days. Naturally, he did not end up in jail, but this is one story of many about families suffering difficulties, single-parent families, families that count on their children to go to work, but then they are recruited to the army and can’t help,” says Eckstein.

“We try to help so that the soldiers will be able not only to live in dignity, but also so they won’t have to face the internal conflict between their responsibility to their family and their military service,” he emphasizes. “Our soldiers deserve better.”

Hundreds of male and female lone soldiers, whose families live abroad, presently serve in the IDF. They spend the days of the week among their comrades in the military framework, but at the end of the week, when their friends go home to their families, they spend their weekends alone.

Many of the families of these soldiers can’t afford to buy a flight ticket so that their sons and daughters would be able to visit them for the holidays and spend time with them. Therefore, in addition to helping lone soldiers and soldiers in need by providing them with gift certificates for food and clothing, The Fellowship, El Al and the Association for the Wellbeing of Israel's Soldiers have joined forces, together with the El Al’s Matmid frequent flyer club, to finance flights for hundreds of lone soldiers to their families abroad during the holidays.

“To see one’s family, even for a short time, encourages you to continue, to continue giving and contributing,” says Eckstein. “I know that the lone soldiers are happy to get such an opportunity. From my viewpoint, it is immense joy to give it to them. But I must say that although we try to give as much as possible, it is still not enough.”