Russia reports detection of missile launch forcing Israel to admit it tested Anchor target missile together with US; test declared a success

Shortly after Russia announced it detected the launch of two ballistic missiles from the central part of the Mediterranean, Israel's Defense Ministry issued a statement saying it successfully tested an Anchor target missile.

The missile is part of Israel's Hetz anti-missile system. The test was carried out with the US Missile Defense Agency.

Russia's report said the launch was detected at 9:16 am Israel time while the Defense Ministry statement said the test took place at 9:15 am. It was further stated that the test was successful and was conducted in the Mediterranean from Air Force field in central Israel.

Also Tuesday, Prime Minister Benjamin Netanyahu warned against attacking the State of Israel. "The reality around us is changing. I want to say to anyone who wants to harm us – it is not advisable." 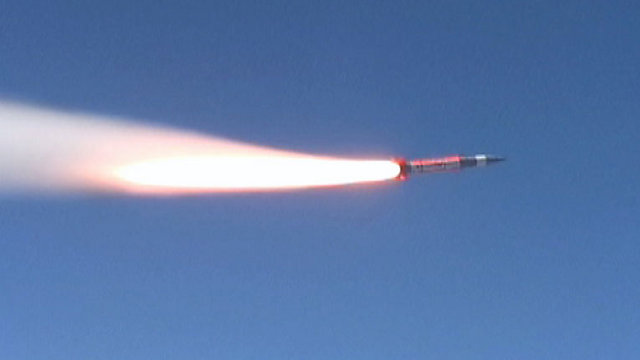 During the inauguration of a hi-tech park in Beersheba, he added, "Security is among things used to prevent overflow of the Negev with terrorists and infiltrators. We need to ensure our borders."

Earlier on Tuesday, Russian news agencies quoted the Defense Ministry as saying that Russian radar detected the launch of two ballistic "objects" towards the eastern Mediterranean from the central part of the sea.

Interfax news agency quoted a ministry spokesman as saying the launch was detected at 10:16 am Moscow time (0616 GMT) by an early warning radar station at Armavir, near the Black Sea, which is designed to detect missiles from Europe and Iran.

The agencies did not say who had carried out the launch and whether any impact had been detected. The ministry declined comment to Reuters.

Syrian state sources said the missiles had fallen harmlessly into the sea and there were no no signs of a missile attack or explosions in Damascus on Tuesday, Itar-Tass news agency said.

A ministry official had earlier criticized the United States for deploying warships in the Mediterranean close to Syria.