President Obama: Syria not Iraq, response will be 'limited'

At meeting with congressional leaders, US president says confident 'proportional' strike on Syria will be approved

President Barack Obama said on Tuesday he was confident that Congress would vote in favor of US military action in Syria and said the United States had a broader plan to help rebels defeat President Bashar Assad's forces.

During a meeting with congressional leaders at the White House, Obama called for a prompt vote on Capitol Hill and reiterated that the US plan would be limited in scope and not repeat the long US wars in Iraq and Afghanistan.

Obama said he wants the American people to know, quote, "This is not Iraq, and this is not Afghanistan."

"What we are envisioning is something limited. It is something proportional. It will degrade Assad's capabilities," Obama said.

"At the same time we have a broader strategy that will allow us to upgrade the capabilities of the opposition," he said.

Obama said he was willing to address concerns among lawmakers about the authorization for force that the White House sent to Congress. 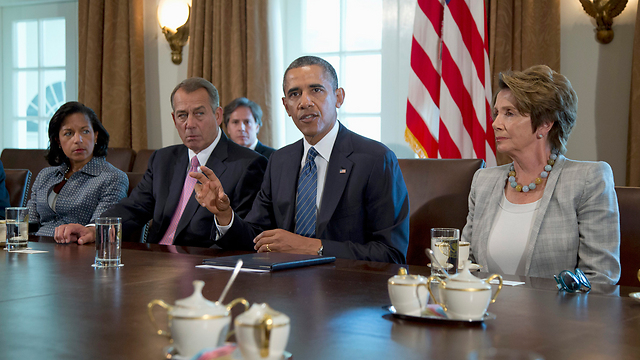 'We have broader strategy.' Obama with congressional leaders (Photo: AP)

"I look forward to listening to the various concerns of the members who are here today. I am confident that those concerns can be addressed," he said.

"I would not be going to Congress if I wasn't serious about consultations and believing that by shaping the authorization to make sure we accomplish the mission, we will be more effective."

Republican Speaker of the House of Representatives John Boehner, Democratic House leader Nancy Pelosi, and Republican Senate leader Mitch McConnell were present at the meeting along with the chairs of congressional committees that deal with national security and the armed services.

Asked whether he was confident Congress would vote in favor of a strike, Obama said: "I am."

Obama reiterated his "high confidence" that the Syrian government used chemical weapons against its people. The president said that posed a serious national security threat to the United States and to the region.

Repeating the argument that administration officials have made central in their sales pitch to Congress, Obama said not holding Assad accountable would send the message to US adversaries that international norms around issues like nuclear proliferation had little meaning.

"We are going to be asking for hearings and a prompt vote," he said. "I'm very appreciative that everybody here has already begun to schedule hearings and intends to take a vote as soon as all of Congress comes back early next week."