President Vladimir Putin warned the West against taking one-sided action in Syria but also said Russia "doesn't exclude" supporting a UN resolution on punitive military strikes if it is proved that Damascus used poison gas on its own people.

In a wide-ranging interview with The Associated Press and Russia's state Channel 1 television, Putin said Moscow has provided some components of the S-300 air defense missile system to Syria but has frozen further shipments. He suggested that Russia may sell the potent missile systems elsewhere if Western nations attack Syria without UN Security Council backing.

The interview Tuesday night at Putin's country residence outside the Russian capital was the only one he granted prior to the summit of G-20 nations in St. Petersburg, which opens Thursday. The summit was supposed to concentrate on the global economy but now looks likely to be dominated by the international crisis over allegations that the Syrian government used chemical weapons in the country's civil war. 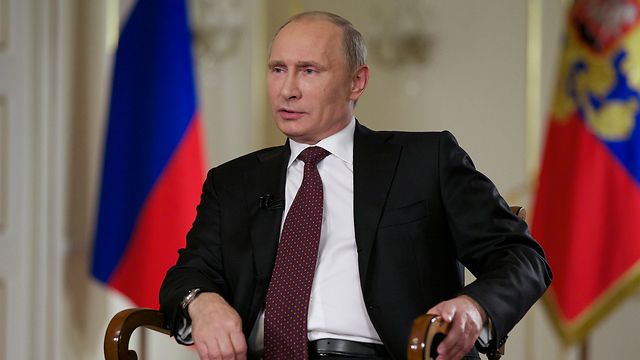 Putin said he felt sorry that President Barack Obama canceled a one-on-one meeting in Moscow that was supposed to have happened before the summit. But he expressed hope the two would have serious discussions about Syria and other issues in St. Petersburg.

"We work, we argue about some issues. We are human. Sometimes one of us gets vexed. But I would like to repeat once again that global mutual interests form a good basis for finding a joint solution to our problems," Putin said.

He also denied that Russia has anti-gay policies -- an issue that has threatened to embarrass the country as it prepares to host the Winter Olympics in February.

The Russian leader, a year into his third term as president, appeared to go out of his way to be conciliatory amid a growing chill in US-Russian relations. The two countries have sparred over Syria, the

Edward Snowden affair, Russia's treatment of its opposition and the diminishing scope in Russia for civil society groups that receive funding from the West.

Putin said it was "ludicrous" that the government of President Bashar Assad - a staunch ally of Russia - would use chemical weapons at a time when it was holding sway against the rebels.

"From our viewpoint, it seems absolutely absurd that the armed forces, the regular armed forces, which are on the offensive today and in some areas have encircled the so-called rebels and are finishing them off, that in these conditions they would start using forbidden chemical weapons while realizing quite well that it could serve as a pretext for applying sanctions against them, including the use of force," he said.

The Obama administration says 1,429 people died in the Aug. 21 attack in a Damascus suburb. Casualty estimates by other groups are far lower, and Assad's government blames the episode on rebels trying to overthrow him. A UN inspection team is awaiting lab results on tissue and soil samples it collected while in Syria before completing a report.

"If there are data that the chemical weapons have been used, and used specifically by the regular army, this evidence should be submitted to the UN Security Council," added Putin, a former officer in the Soviet KGB. "And it ought to be convincing. It shouldn't be based on some rumors and information obtained by special services through some kind of eavesdropping, some conversations and things like that."

He noted that even in the US, "there are experts who believe that the evidence presented by the administration doesn't look convincing, and they don't exclude the possibility that the opposition conducted a premeditated provocative action trying to give their sponsors a pretext for military intervention."

He compared the evidence presented by Washington to false data used by the Bush administration about weapons of mass destruction to justify the 2003 invasion of Iraq.

"All these arguments turned out to be untenable, but they were used to launch a military action, which many in the US called a mistake. Did we forget about that?" Putin said.

He said he "doesn't exclude" backing the use of force against Syria at the United Nations if there is objective evidence proving that Assad's regime used chemical weapons against its people. But he strongly warned Washington against launching military action without UN approval, saying it would represent an aggression.

Putin reinforced his demand that before taking action, Obama needed approval from the UN Security Council. Russia can veto resolutions in the council and has protected Syria from punitive actions there before.

Asked what kind of evidence on chemical weapons use would convince Russia, Putin said "it should be a deep and specific probe containing evidence that would be obvious and prove beyond doubt who did it and what means were used."

Putin said it was "too early" to talk about what Russia would do if the US attacked Syria.

"We have our ideas about what we will do and how we will do it in case the situation develops toward the use of force or otherwise," he said. "We have our plans."

Putin called the S-300 air defense missile system "a very efficient weapon" and said that Russia had a contract for its delivery of the S-300s to Syria. "We have supplied some of the components, but the delivery hasn't been completed. We have suspended it for now," he said.

"But if we see that steps are taken that violate the existing international norms, we shall think how we should act in the future, in particular regarding supplies of such sensitive weapons to certain regions of the world," he said.

The statement could be a veiled threat to revive a contract for the delivery of the S-300s to Iran, which Russia canceled a few years ago under strong US and Israeli pressure.

Putin praised Obama as a frank and constructive negotiating partner and denied reports that he had taken personal offense at remarks by Obama comparing Putin's body language to that of a slouching, bored student. Putin said appearances can be deceiving.

Putin also accused US intelligence agencies of bungling efforts to apprehend Snowden, the National Security Agency leader, who is wanted in the US on espionage charges. He said the United States could have allowed Snowden to go to a country where his security would not be guaranteed or intercepted him along the way, but instead pressured other countries not to accept him or even to allow a plane carrying him to cross their airspace. Russia has granted him temporary asylum.

Putin also gave the first official confirmation that Snowden had been in touch with Russian officials in Hong Kong before flying to Moscow on June 23, but said he only learned that Snowden was on the flight two hours before it arrived. Putin once again denied that Russia's security services are working with Snowden, whose stay in Russia has been shrouded in secrecy.

On another topic, he denied at length charges that Russia has anti-gay policies, indicating that Obama was welcome to meet with gay and lesbian activists in Russia during his visit. He even said he might meet with a similar group himself if there is interest from the gay community in Russia.

Putin rejected the criticism of a Russian law banning gay propaganda that prompted some activists to call for the boycott of the 2014 Winter Games in Sochi, arguing that it wouldn't infringe on the rights of gays.

He also said that athletes and activists would not be punished if they raise rainbow flags or paint their fingernails in rainbow colors at the Feb. 7-23 Olympics.

But he clearly has no intention of allowing a gay pride parade or other such actions: Last month, Putin

signed a decree banning all demonstrations and rallies in Sochi throughout the Winter Games.

relationship, the Russian president urged everyone to avoid jumping to conclusions.

"There are some gestures, of course, that you can only interpret one way, but no one has ever seen those kinds of gestures directed by Obama at me or by me at Obama, and I hope that never happens," he said.

"Everything else is fantasy."