Russia is sending a missile cruiser to the east Mediterranean to take over the navy's operations in the region, Interfax quoted a military source as saying on Wednesday, as the United States prepares for a possible military strike in Syria.

President Barack Obama has won backing from key figures in the US Congress in his call for limited US strikes on Syria to punish President Bashar Assad for his suspected use of chemical weapons against civilians.

The ship, Moskva, will take over operations from a naval unit in the region that Moscow says is needed to protect national interests. It will be joined by a destroyer from Russia's Baltic Fleet and a frigate from the Black Sea Fleet.

"The Cruiser Moskva is heading to the Gibraltar Straits. In approximately 10 days it will enter the east Mediterranean, where it will take over as the flagship of the naval task force," the source said.

Last week, the Defence Ministry said new warships, including the Moskva, were being sent to the Mediterranean but described the movements as routine deployments.

Russia is closely monitoring the region's developments, recently testified to by the Russian military's spotting of the Israeli missile launch from the central Mediterranean.

The Russian notice of the launch forced Israel to release a formal statement admitting to the successful test of the Ankor missile used to test the Hetz air defense system.

Earlier on Wednesday Russian President Vladimir Putin confirmed in an interview for AP that Moscow supplied Syria with components for the high-end S-300 air defense system, but that the shipment was not completed: "We have suspended it for now," he said but added that "if we see that steps are taken that violate the existing international norms, we shall think how we should act in the future, in particular regarding supplies of such sensitive weapons to certain regions of the world."

On the other side of the fence, two days ago it was reported that the American aircraft carrier USS Nimitz and several destroyers in its trail are making their way to the Red Sea, in the course of the American preparations for a possible strike in Syria. 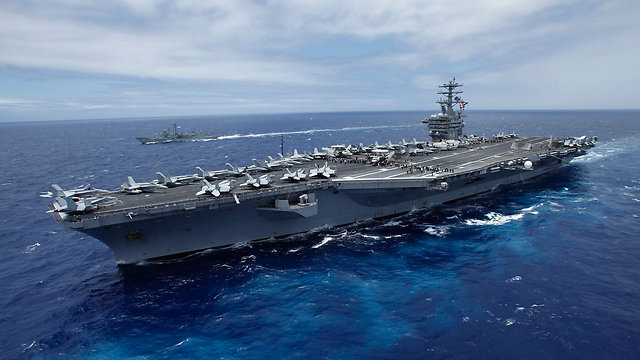 The naval group accompanying the Nimitz includes four destroyers and an amphibious transport, the USS San Antonio, which carries Marines and helicopters but does not have cruiser missiles, and its participation in the strike is doubtful.

The nuclear-powered Nimitz and other ships were until now positioned in the Indian Ocean, aiding American operations in Afghanistan.

Washington defense sources said the group may continue from the Red Sea further into the Mediterranean.

In the eastern Mediterranean five American destroyers are already set for the attack. These are loaded with about 200 Tomahawk missiles, with a range of 1,600 km and astounding accuracy. The missiles fly at low altitudes, and may be fired at a great distance from Syria's beaches.