Egypt's interior minister survived an assassination attempt on Thursday when a bomb blew up as his convoy drove through Cairo's Nasr City district, state media and security officials said.

Security sources said at least 10 people had been injured, but the minister, who lives in Nasr City, just outside the city centre, was not hurt. Security officials said Egyptian police killed two of the attackers.

The minister, Mohamed Ibrahim, has been among those responsible for a violent crackdown on supporters of Mohamed Morsi, the Islamist president ousted two months ago by the army following mass protests against his rule. 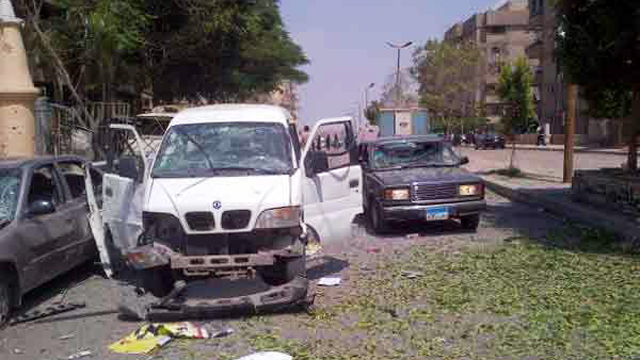 Scene of the blast 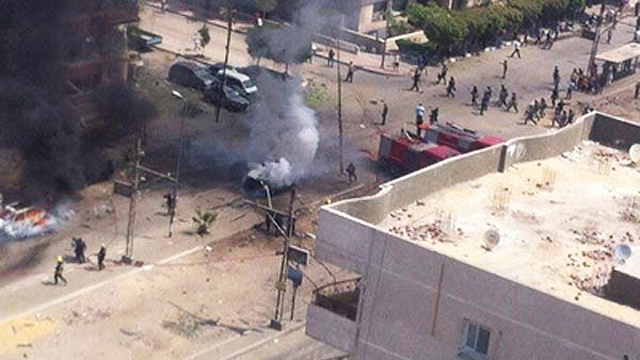 The security sources said a bomb had exploded near his convoy. The state-run Nile TV reported that Ibrahim had survived an assassination attempt. Initial reports suggested the device had been a car bomb but state TV later reported that it had been thrown from a building.

Responding to a question on whether the attack marked the start of "a new wave of terrorism", Mohamed Ibrahim said: "What happened today is not the end but the beginning". He added that citizens needed to take care.

Senior Muslim Brotherhood leader Amr Darrag condemned the assassination attempt, calling it "regrettable." Ibrahim has helped to oversee a violent crackdown against supporters of Morsi and the Brotherhood, which the military-backed government accuses of terrorism.

The military-backed government that took over from Morsi has killed hundreds of supporters of his Muslim Brotherhood, which it accuses of inciting violence and committing terrorist acts, and arrested most of its top leaders. Around 100 members of the security forces have also been killed.

The Brotherhood denies the allegations and accuses the army of staging a coup and trying to return Egypt to the repressive era of former president Hosni Mubarak. It says it is committed to peaceful resistance.

Meanwhile, the Egyptian army continues in its operations against the Sinai Peninsula's militants groups. The Egyptian state newspaper al-Gumoria reported that the army killed about 20 gunmen and injured 50 in operations in Sinai. According to the report, the army also destroyed 95% of the smuggling tunnels into the Gaza Strip.

It was also reported that the forces are now attempting to destroy the tunnels which entryways are located inside buildings bordering on the Strip.

On their part, Gaza's Palestinians are continuing to attempt to construct tunnels headed to Israel. Palestinian media reported that a member of Hamas ' military wing was killed in the east side of Gaza City in a tunnel construction site.

According to Gaza's Health Ministry, the deceased is Mohamed Lutfi Abd, 24.

Defense sources said Hamas continues to hold military spectacles across the Strip, and that hundreds of Hamas members attended a nighttime military display in Gaza City.

According to the sources, the event was officially defined as a public drill to demonstrate readiness for "enemy invasion."

"It seemed like an attempt by the group to deter Israel from taking advantage of the Syrian conflict to move against Gaza, and also to make any Gaza resident who considers to mutiny against Hamas to think twice."

The talk of mutiny became more prominent recently, against the background of a meeting between leaders of the Egyptian Tamarood movement, which ignited the protests which led to Mohamed Morsi's ouster from the presidency, and their Gaza Strip counterparts.

Tamarood founder Mohamed Badr said that "the aim of the meeting was to convey the model and activity of the Tamarood movement to the Gaza Strip." According to him, "We can use this model to fight all dictatorial regimes."