Former President Moshe Katsav who is serving a seven-year sentence for rape and other sex offences left the Maasiyahu Prison on Monday for a 24-hour leave.

This is Katsav's first leave since be began serving his sentence a year and nine months ago. He will spend his leave under house arrest in Kiryat Malachi but will be allowed to attend synagogue.

The former president was greeted outside the prison by his brother Lior who told reporters: "Moshe Katsav has been wronged. We honor the court's ruling, but many legal minds know the severity of the injustice.

He was accused of things that never happened. The fight for his innocence will go on, the truth will come out. He gave his whole life for the country and for society."

WIZO chairperson Gila Oshrat said, "There's no room to give leaves to a prisoner who has never expressed regret or took responsibility for his actions. This is a difficult message the State is giving the victims and society in general."

Katsav is held at the Maasiyahu Prison's religious wing and according to the terms of his leave, he will be under police supervision in the evening hours and will have to sign in at a police station at the beginning and end of the leave.

The Israel Prison Service said that Katsav meets all three criteria for a leave: Completing a quarter of his sentence, passing a mental health center evaluation and attending a workshop on sexual crimes in prison. 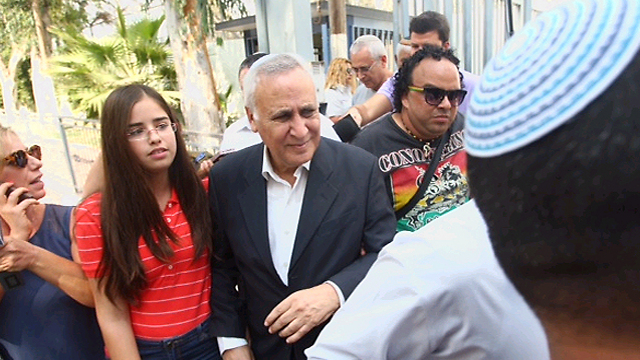 Katsav will be under house arrest (Photo: Motti Kimchi)

His incarceration conditions are set to improve after several leaves. He will be able to visit his house once a month for a 72-hour stretch and will not have to be on house arrest.

Katsav has been serving a seven-year sentence since December 2011 following his conviction on two counts of rape, indecent acts, sexual harassment and obstruction of justice. A year and a half a go he was allowed to leave prison for eight hours in order to attend his son's wedding.

He has filed a request for pardon from President Shimon Peres despite never admitting to his crimes or expressing regret.