Moscow says will urge Syria to place its 'chemical weapons under international control, then have them destroyed.' Syrian FM says welcomes Russian proposal. Israeli source notes such a solution would be in everyone's best interest – including Israel's

After talks with Syrian Foreign Minister Walid al-Moallem in Moscow, Sergei Lavrov called on Syria to "place the chemical weapons under international control and then have them destroyed.”

Lavrov said Monday that if such a move would help avert a possible US strike on Syria, Russia will start work "immediately" to persuade Syria to relinquish control over its chemical arsenals. 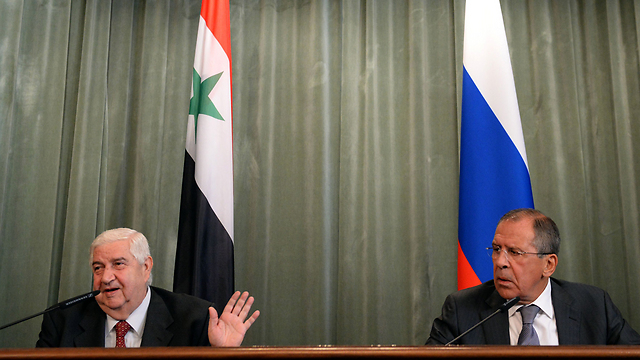 According to him such a plan would help "avoid military strikes" that are being considered by the United States and its allies. Lavrov said he had already passed the proposal to al-Moallem in Moscow and hoped for a "quick and positive answer" from Syria.

Syria welcomed the Russian proposal, as al-Moallem praised the Kremlin for seeking to "prevent American aggression".

Moallem  who spoke to reporters through an interpreter after Russia expressed hope the proposal could avert military strikes against Syria, stopped short of saying explicitly that President Bashar Assad's government accepted it.

A senior Israeli official commented on the international bid to remove chemical weapons from Syria, saying "this is the best solution also for Israel. Everyone is now playing their own game, but everyone's interest, including Israel's, is to destroy Assad's chemical stockpiles without going to war."

UN Secretary General Ban Ki-moon said that if the report by international inspectors shows chemical weapons were used in Syria, the Security Council would be able to arrive at a decision together.

In a speech he gave, Ban said that the international community was obligated to act if chemical weapons were used. 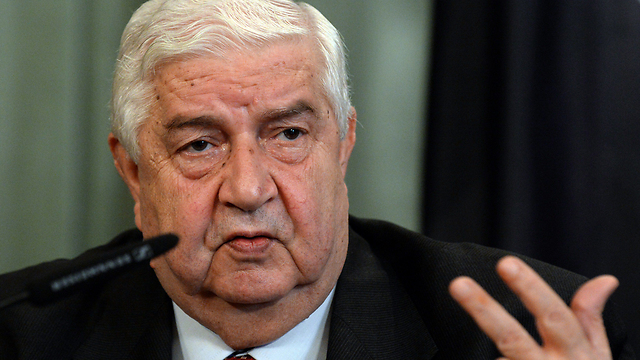 Both the Russian and the Syrian foreign ministers on Monday strongly pushed for the return of United Nations inspectors to Syria to continue their probe into the use of chemical weapons and again warned Washington against launching an attack.

Diplomatic sources said that Russia was pressuring the UN International Atomic Energy Agency (IAEA) to speak up about the nuclear dangers entailed in an attack on Syria, citing fears that the country's nuclear research reactor – located not far from Damascus – will be damaged.

The United States said on Monday it disagreed with a Russian request for the UN nuclear agency to analyse the possible risks involved if a Syrian reactor were to be hit during military strikes.

Russia said last week that a US-led military action against Syria's government could have catastrophic effects if a research reactor near Damascus that contains radioactive uranium was struck "by design or by chance." Russia's Foreign Ministry called on the International Atomic Energy Agency (IAEA) to asses the risk as the United States considers a punitive military strike in Syria over an alleged chemical attack.

Lavrov's proposition comes as President Barack Obama, who blames President Bashar Assad for killing hundreds of his own people in a chemical attack last month, is pressing for a limited strike against the Syrian government. Syria has denied launching the attack, insisting along with its ally Russia that the attack was launched by the rebels to drag the US into war.

Minister Lavrov said after Monday's talks with his Syrian counterpart Walid al-Moallem that UN chemical weapons experts should complete their probe and present their findings to the UN Security Council.

"We have agreed to push for the soonest return of inspectors," Lavrov said. Al-Moallem said his government was ready to host the UN team, and insisted that Syria is ready to use all channels to convince the Americans that it wasn't behind the attack. He added that Syria was ready for "full cooperation with Russia to remove any pretext for aggression." Neither minister, however, offered any evidence to back their claim of rebel involvement in the chemical attack. Lavrov said that Russia will continue to promote a peaceful settlement and may try to convene a gathering of all Syrian opposition figures to join in negotiations. He added that a US attack on Syria would deal a fatal blow to peace efforts. Lavrov wouldn't say how Russia could respond to a possible US attack on Syria, saying that "we wouldn't like to proceed from a negative scenario and would primarily take efforts to prevent a military intervention." President Vladimir Putin said that Moscow would keep providing assistance to Syria in case of US attack, but he and other Russian officials have made clear that Russia has no intention to engage in hostilities. Lavrov also denied allegations that Russia may have sponsored a deal between the US and Syria during the Group of 20 summit in St. Petersburg last week, where Putin discussed the Syrian crisis with Obama.

"There won't be and there can't be any deal behind the back of the Syrian people," Lavrov said.

In the report, it was claimed that "armed Syrian militants will use territories controlled by the Syrian regime to perpetrate their provocation plan."