The Egyptian army continued its intensive operation to eradicate terrorism in the Sinai Peninsula on Monday. The official Egyptian news agency reported Tuesday that nine militants were killed and 10 more were arrested in a joint operation of the Egyptian army, air force and ground forces against strongholds of radical jihadists.

The Egyptian newspaper Al-Masri Al-Youm reported that according to security sources in the area, the Egyptian army increased its presence in central Sinai in order to fight terrorists who escaped to the region in the past few days due to large-scale operations in northern Sinai.

During Monday's military operation, violent clashes broke out between supporters of ousted President Mohamed Morsi and soldiers in northern Sinai, where two people were killed and dozens were injured. Al Jazeera claimed that the incident began after several demonstrators blocked the international road in the area. In another incident Monday, two Egyptian soldiers were killed after gunmen attacked military forces in south El-Arish.

In recent days, the army continued to try and expose the Palestinian involvement in the events in Sinai. On Sunday, the official spokesperson for the Egyptian army uploaded a photo to his official Facbook page, where soldiers presented items they seized from terrorist strongholds in northern Sinai. Among the many items appeared a rocket launcher that reads in Arabic and English "Al-Quds Brigades", which is the armed wing of the Palestinian Islamic Jihad in the Gaza Strip.

Another organization that was widely covered in Egyptian media Tuesday morning is Ansar Bayt al-Maqdis, the same radical Salafi organization that has been active in Sinai and Gaza and claimed responsibility for the assassination attempt of Egyptian Interior Minister General Mohammed Ibrahim last Thursday.

State-owned Al-Ahram newspaper claimed that in that "infidel" organization there are some 2,000 armed militants, who are proficient in martial arts and use of weapons, and can make very high-level bombs and explosive devices. 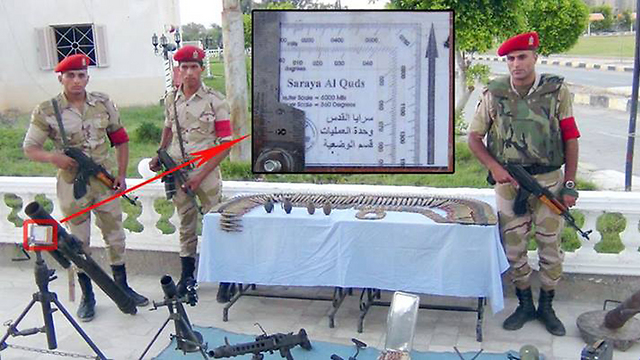 Egyptian army presents seized weapons, ammo
A security source that was quoted by the paper said that among the members of the organization is the brother of al-Qaeda Leader Ayman al-Zawahiri, Muhammad al-Zawahiri, who was recently arrested following events in Sinai. The newspaper accused Morsi of releasing him, together with another 130 senior terrorists who are affiliated with jihadist organizations. The paper further argued that Ansar Bayt al-Maqdis is affiliated with global Muslim Brotherhood.

In light of discussions of the Egyptian Constituent Assembly, there is increasing discourse regarding another possible presidential candidate: Defense Minister General Abdel Fattah al-Sisi, who is nowadays considered the strongest man in the country.

Presidential candidates in the latest elections estimated that if al-Sisi indeed announce he is running, he will win. The latest comments came from senior opposition member Hamdeen Sabahi, who came in third in the presidential elections, and was seen as the candidate who is supported by the country's left-wing.

Ahmed Shafik, the last prime minister to serve under former Egyptian president Hosni Mubarak, recently stated that if al-Sisi joins the race, he will choose not to run for president and will give him his support.