Taking WMDs out of Syria is 'nightmare' for Obama

Issues that led president to outline potential limited action in Syria are expected to follow him on way to implementation of initiative to neutralize Assad's arsenals. Country that sends its people to area will 'become target,’ predicts expert

Neutralizing Syria’s stockpile of chemical weapons may take years, lead to the deployment of soldiers on the ground and bring about casualties, the New York Times reported on Wednesday. The report was based on conversations with experts in the matter, including international weapons inspectors and senior officials involved in the network of diplomacy between Syria and the countries involved.

Safe transport of chemical weapons in a war zone is “just the first nightmare of making this work," admitted a senior adviser to US President Barack Obama.

”We’re talking boots on the ground," said a UN weapons inspector. "We’re not talking about just putting someone at the gate. You have to have layers of security." These remarks are in line with Pentagon estimates, numbering a force of 75,000 soldiers to ensure the success of the mission. That number is in doubt by other government sources, but there is no doubt that it gives a scale to the size of the operation.
Obama addresses the nation (Video: Reuters)    (צילום: רויטרס)
X

According to the American newspaper, Assad’s chemical arsenals are scattered throughout Syria. Traces can be found in factories, warehouses and many bunkers – all which should be under international supervision, as part of the initiative designed to eliminate the US attack on that country.

The many reports on the transport of these arsenals by Assad himself, who feared them falling into the hands of rebel forces, have also led to the blurring of western intelligence on the subject. Traditional evaluation led to an estimate of 42 different chemical sites, but a US intelligence source recently announced that his country "currently knows for a fact about only 19 sites." 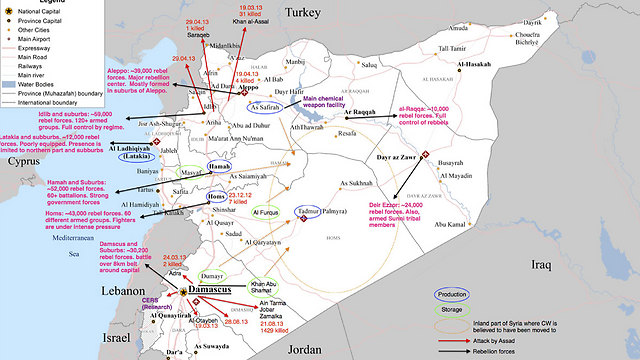 The main problem, it is argued, is that even in times of peace, a task such as this has become a major challenge. North Korea, Iraq and Iran are the most recent countries serving as an example of this. Syria, is in its third year of a bloody civil war, and many of chemical weapons are located in battle areas. “It’s a gargantuan task for the inspectors to mothball production, install padlocks, inventory the bulk agent as well as the munitions,” a chemical weapons expert from California stressed. “Then a lot of it has to be destroyed — in a war zone. What I’m saying is, ‘Beware of this deal,’ It’s deceptively attractive.” A British expert on chemical weapons said with a degree of certainty that "some casualties would be unavoidable" According to him, "The question you have to ask is whether the benefits would be worth that kind of pain."

Other experts stressed that this is not a theoretical issue, but an actuality and a realistic estimate. "Whichever country would be sent in there to try to get the accountability and do the security, and maybe eventually get to the destruction — they will be a target for someone, for one group or another. Because no matter who you are, you get mortared somewhere by one of the parties.”