September 11th is Syrian dictator’s birthday; opposition's Facebook pages mention date, heap on a variety of insults, curses: ‘It should be his last birthday.’ On other hand, gets thousands of likes from supporters. Syrian social media at war

Together with the relief from putting off the US attack on Syria, and in light of discussion surrounding the Russian initiative to resolve the chemical weapons conflict diplomatically, on Wednesday, Bashar Assad celebrated a more joyous occasion – his 48th birthday.

And like his country embroiled in a civil war, Syria's virtual space is divided into supporters and opponents of the president. Thousands of Syrian citizens showered him with best wishes, while those affiliated with the opposition take the opportunity to ‘congratulate’ him in other other ways.

One of the major Facebook pages identified with the opposition since the beginning of the uprising posted on Wednesday, "On this day was born 'Nero the Czar of Syria,’ they compare him to the cruel Roman emperor who ruled in the first century AD. "Bashar, son of Anisa and Hafez, Allah curse them. He was born to destroy Syria and murder thousands of children and innocents. We say to him on this miserable anniversary: every year a million curses upon you, you and your parents, and know that our revolution will triumph sooner or later and you will not escape punishment." 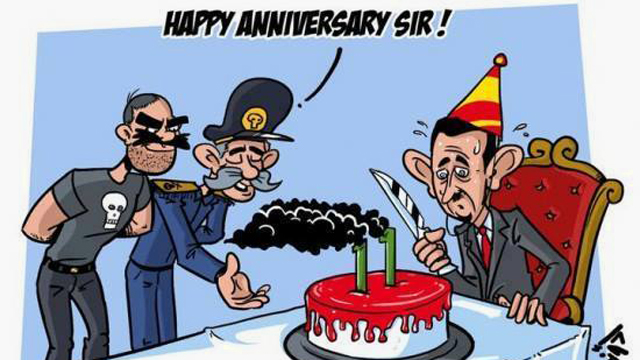 Alongside the text, a caricature is posted, which shows Assad's aides wishing him good luck. He himself is sitting on a chair with a knife threatening to cut the birthday cake which oozes blood, with smoke rising from the candles, symbolizing the situation of Syria today.

But Syria is not the only country in the Arab world which referred to the birthday. Already in August, the Egyptian newspaper Al-Masri Al-Yom published a caustic article in recognition of the occasion. The headline read, "Next birthday for Assad ... not happy." The article stated, "For the first time, Assad reaches September 11th without blowing out the candles, because the gift that comes to mind is coming to him by way of the Americans. And with the gift, his ears will ring due to the noise that will come on the backs of the missiles and the bombs by air and by sea, instead of celebratory fireworks."

But as befits a tyrant, the media and social networks in Syria are also full of greetings and flattery. Also, AFP quoted citizens who claimed they were going to participate in a mass celebration parade marking Assad’s birthday, from the sports complex in the Al-Maza neighborhood, to Al-Thawra street in the center of Damascus.

The website Dams Post, affiliated with the regime, reported, "Thousands of Syrians are sending greetings to social networking pages that support him." The site made sure to put out jabs at other Arab countries, "Unlike kings and presidents in Arab countries, Assad did not make an official state holiday out of his birthday. This is why only a few Syrians know that it is his birthday." 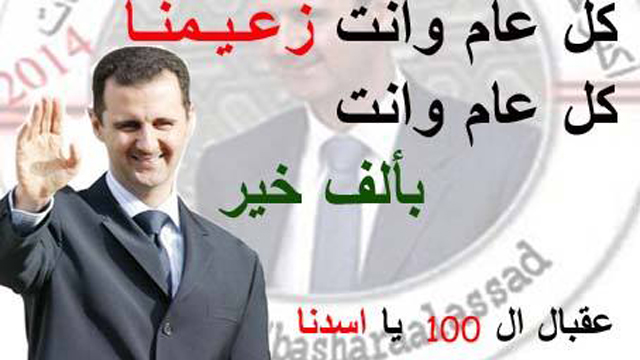 On the Facebook page promoting the campaign for Assad’s 2014 ‘candidacy’ for president, which has more than 50,000 likes, it was posted Wednesday morning, "Today is the birthday of our Assad. Everyone congratulates him.”

“Till 100, our Assad." In the flattering picture underneath, Assad appears with the words, “Happy new year, dear man."

The congratulatory message got thousands of likes, and positive comments, "Until 1000 to the lion of Syria," one female surfer wrote. Another added, "Allah will protect you, our Assad." Another posted, "Today is the day of Bashar Assad. Wishing that every year, you defeat the enemies and every year, you will be a world leader."

On another page identified with the regime called "We are all Syria's Assad," was posted to mark the occasion, "Mr. President, on your birthday, we congratulate ourselves that you are our leader. We congratulate our army because you are its commander."