Lethal attack or false report: The Qatar-based Al Jazeera network quoted Syrian opposition sources as saying that the Syrian regime has attacked Damascus's Juber neighborhood with toxic gas Thursday morning. No further details were provided. The report could not be confirmed.

At the same time, videos allegedly documenting the victims of a "chemical attack" began surfacing online.

Images distributed by the opposition show supposed victims of a chemical assault suffering from difficulty in breathing. The video shows a doctor explaining that the sarin and VX agents were used in Thursday morning's alleged assault.

Video that surfaced on web
X

Video that surfaced on web

Several people were reported hurt in the attack and transferred to medical centers, according to the opposition. It was further claimed that Assad's forces tried to enter Juber after the attack but that the Free Syrian Army stopped them as heavy battles ensued.

The report comes days after Bashar Assad's regime agreed to hand over its chemical weapons for inspection by the international community. 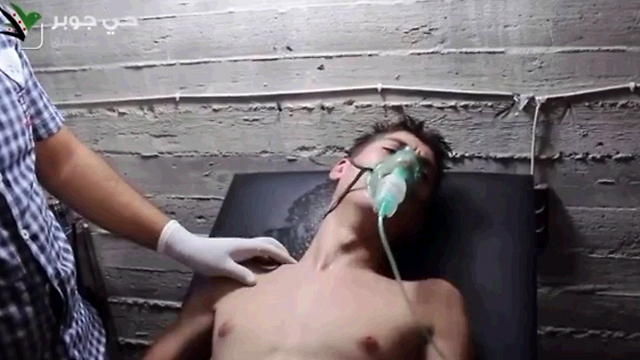 One of the victims of the alleged assault

The top rebel commander, Gen. Salim Idris, said regime officials should be referred to the International Criminal Court for the alleged Aug. 21 chemical attack near the Syrian capital that killed hundreds, CBS reported.

Idris, speaking for the Free Syrian Army, says "chemical weapons were the tool of the crime" in the attack in Ghouta suburb. He says the FSA "categorically rejects the Russian initiative."

Idris's statement was broadcast on Thursday on pan-Arab satellite channels, hours ahead of talks in Geneva between US Secretary of State John Kerry and Russian Foreign Minister Sergey Lavrov on the Russian proposal.