Jacob Frenkel opens up: 'It was a silly mistake'

For first time, Professor Jacob Frenkel reveals his version of Hong Kong incident that foiled his third appointment as Bank of Israel governor

"I did not intend to buy anything in Hong Kong's duty free, but while conversing with my colleague, an economist and portfolio manager and acquaintance of many years, I noticed a pile of large cases and bags for carrying suits on planes," Professor Jacob Frenkel said, when for the first time describing the infamous incident that has been in his shadow for seven years, and ultimately caused him to not be appointed as governor of Bank of Israel for the third time.

"I decided to buy one of them, but the queue was very long and I still had to undergo security checks for the El-Al flight. I showed my colleague the pile of garment bags and asked her to pay for one when she reaches the register. I did not want to burden her with carrying the garment bag, so we agreed I would just take it and she would pay for it. We agreed she would hand me the receipt at the gate and I would pay her back.

"And so I did: I showed the cashier the garment bag and said that my colleague – who I pointed to – would pay for it when she reaches the register because I must catch my flight. Of course it was a silly mistake. I was not paying attention because I was in a hurry for the security check. I acted without any bad intentions.

"After going through the security check, I received a text message from my colleague. She wrote that she too had to run to catch her flight and we would not have time to meet before we each fly off. She did not mention the garment bag, and I assumed she paid for it as we agreed. But right before I got on the plane, a Chinese-speaking woman approached me and said: 'The bag, what about the bag?' I did not exactly understand what she meant. 'The receipt is with my colleague who is about to take off to North America,' I responded, and tried to contact her by phone. She did not answer. Perhaps she had already gotten on the plane; perhaps she turned off her phone." 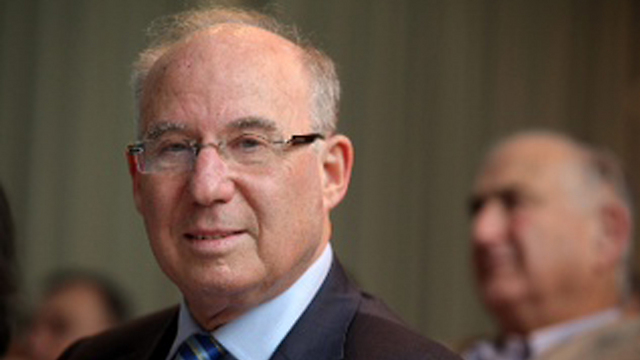 Prof. Jacob Frenkel, tells his version (Photo: Mickey Noam Alon)
Prof. Frenkel, the tragic hero of the Israeli economy in 2013 and a man I have known for many years, has changed: He is humble, pensive, sometimes seems as if suffering from post-trauma. "I made mistakes," he confesses in our conversation, "that if I had not made, I would be the BOI governor today." The story of his third appointment as BOI governor was never fully told by him; occasionally the media revealed pieces, some wrong, that never formed a full picture. Not only the will to share the story with the public prompted Prof. Frenkel to speak up, reveal and expose, but his inner and "unrestrained" impulse to fight for his reputation. "I am willing," he said during the long interview that also discussed his economic opinions, "to admit my mistakes and deal with professional criticism. Deal with legitimate disputes and arguments. I am certain I can refute them one by one. In no way am I willing to stand by the awful and baseless accusation that I, Professor Jacob Aharon Frenkel, am not an honest man." Frenkel is ready to fight for this cause. Therefore, despite the inconvenience it causes him, Prof. Frenkel unfolds his version of the Hong Kong incident step by step, together with documents. Does he truly give full answers to all the questions? The readers will judge. If Frenkel had presented the Turkel Committee these documents from the start, it would have approved – according to members of the committee itself – his appointment.

The full and exclusive interview with Prof. Frenkel is on Friday's issue of Yedioth Ahronoth.