Security officials to testify in retrial of former president, who faces charges related to killings of around 900 protesters during 2011 uprising that led to his ouster

An Egyptian judge on Saturday named top security officials to testify in the retrial of former President Hosni Mubarak, who faces charges related to the killings of around 900 protesters during the 2011 uprising that led to his ouster. The 85-year-old longtime autocrat's previous conviction for failing to stop the killings was overturned on appeals earlier this year, leaving open questions about who ordered the use of deadly force against protesters and who carried out those orders.

Mubarak, who ruled over the Arab world's most populous country for nearly 30 years, grinned and waved at supporters as he was pushed in his wheelchair into the defendants' courtroom cage. Unlike previous court dates, in which the former president was lying on a gurney, Mubarak appeared healthier and more confident as he sat upright in what was his second court appearance since his release from a prison hospital last month. He remains in detention at a military hospital pending corruption charges.

The case against Mubarak appeared on Saturday to grow more intertwined with accusations facing his successor, Mohamed Morsi, who was ousted in a popularly-backed coup July 3. 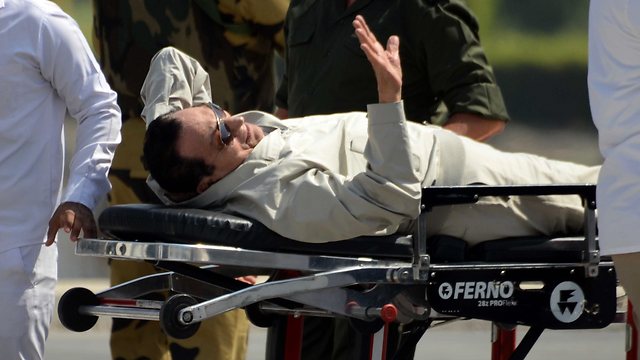 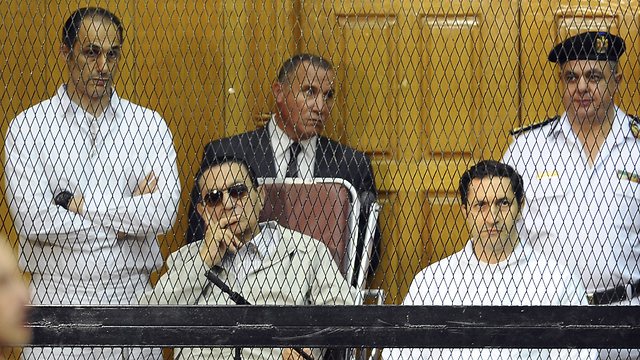 Mubarak, alongside his sons Alaa, Gamal (Photo: AP)
Morsi, Egypt's first democratically-elected president, has been held for more than two months at an undisclosed military facility. He is being investigated on allegations that he and other Muslim Brotherhood leaders conspired with the Palestinian Hamas group in the neighboring Gaza Strip to escape from prison during the anti-Mubarak uprising. That allegation was raised in court by two defense lawyers on Saturday. Brotherhood and Hamas officials however have long denied any connection to the prison breaks. The Brotherhood says the allegations are part of a propaganda blitz that has portrayed the group as a terrorist organization that must be banned. "The authority of power and of the coup turned the victims into the perpetrators and the perpetrators into the victims... completely and clearly surpassing the simplest rules of justice, which are essential to the viability and stability of nations," the Brotherhood said in a statement Saturday. Meanwhile, Judge Mahmoud el-Rachidi ordered a media blackout of the next three court sessions scheduled to run from Oct. 19 until Oct. 21. The sessions will include testimonies from former security and prison officials, including ex-police chief Ahmed Gamal Eddin and ex-intelligence czar Murad Muwafi, who was also governor of the northern Sinai Peninsula bordering Gaza during the 18-day uprising in 2011. In the first few days of the anti-Mubarak protests, official state media tried to paint the uprising as a foreign conspiracy against Egypt and alleged that Hamas was behind the prison breaks and the killings of protesters to turn people against the regime. There has never been a definitive accounting of who was behind the prison attacks, which saw more than 20,000 inmates escape as police tried to crush the massive protests that swept Mubarak from power. In addition to Mubarak, six top police officials and the former interior minister, who oversaw Egypt's feared police for more than a decade, are on trial in the case. Mubarak's two sons and a business associate – who is being tried in absentia – are facing corruption charges in the same case.

During Saturday's session, which was broadcast live on state television, one of the defendant's lawyers suggested that the Brotherhood and members of Hamas' military wing, Izzedine al-Qassam Brigades, were behind the attacks on prisons and police stations during the uprising. Another defense lawyer said the Brotherhood had snipers on the rooftops of buildings overlooking Cairo's Tahrir Square, where many protesters were shot and killed. 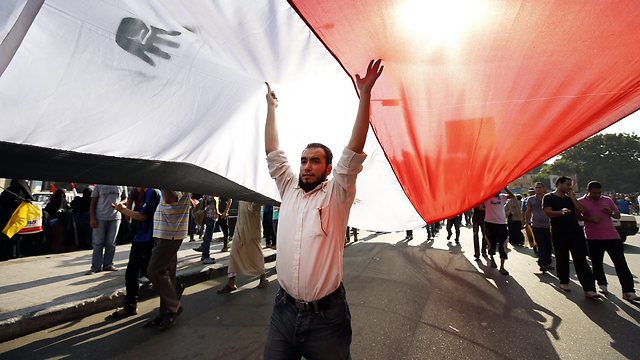 Support rally for Mubarak (Photo: AP)
As the trial resumed, the army continued its largest offensive in years against militants in northern Sinai near the Gaza border. Security officials said Saturday they confiscated explosives near a tunnel to Gaza. Over the past weeks, the military has bulldozed homes along the Gaza border and caved in tunnels beneath them in preparations for creating a buffer zone to reduce weapon smuggling and militant crossings. Elsewhere in Egypt, thousands of Brotherhood supporters protested in scattered rallies on Saturday to mark the one-month anniversary of the killing of more than 600 people when security forces cleared out two pro-Morsi sit-ins in Cairo.

The security raids on the encampments sparked days of bloodshed and the interim military-backed government quickly imposed a state of emergency that gives security forces broad powers to arrest. Cairo and other governorates were also put under curfew. Security officials say the month-long nighttime curfew will likely be extended, but that it will be shorted from seven hours to five. The officials spoke anonymously in line with regulations.