Kibbutz members horrified to find gravestones, tombs destroyed over Yom Kippur, potted plants from graves thrown about. Damage discovered by kibbutz members who came to prepare memorial service for those who fell in '73 War

Members of Kibbutz Mizra were horrified to find that some 20 graves at a nearby cemetery in the Jezreel Valley were desecrated during the Yom Kippur holiday. Graves in the military section, in which a memorial took place Sunday to honor seven members of the kibbutz who fell in the Yom Kippur War, remained intact. Members filed complaints with police.

The cemetery overseer discovered the damage on Saturday night. Initially it was thought that only a few graves had been desecrated, but in the morning it was discovered that nearly 20 graves were desecrated in the bottom half of the cemetery along the road. "Stones were removed from some tombstones, plants were uprooted from tombstones and thrown on other tombstones, and vegetation and irrigation systems were also torn up," said Yossi Amir, a member of the kibbutz. 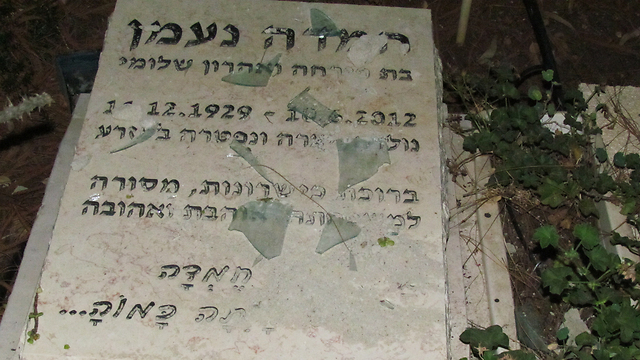 "This is not the first time," he added. "It happens every few months, but it has never been of this magnitude. There were also times when we found an apparatus for smoking drugs on the spot. Apparently whoever did this took advantage of the holiday where no traffic was on the road and you would not see the frenzy.”

In the morning, kibbutz members rushed to repair the damage prior to the memorial service for members who fell in the Yom Kippur War. The Jezreel Valley Regional Council said in a statement that it considers the act very serious. “Council head Eyal Betzer has contacted the commander of the district police to ensure that they do everything to catch the perpetrators and that they be punished severely," it said.

Afula police commander Chief Superintendent Eitan Menashe said police are currently working on an intelligence level and that he believes his team will capture the perpetrators.