A UN photograph of chief UN chemical weapons investigator Ake Sellstrom handing over his report on an August 21 gas attack on Damascus suburbs shows that the report confirms use of the deadly nerve agent sarin.

"On the basis of the evidence obtained during the investigation of the Ghouta incident, the conclusion is that chemical weapons have been used in the ongoing conflict between the parties in the Syrian Arab Republic ... against civilians, including children, on a relatively large scale," the report said.

"In particular the environmental, chemical and medical samples we have collected provide clear and convincing evidence that surface to surface rockets containing the nerve agent sarin were used," it said.

The photo released by the United Nations shows Sellstrom giving the report, which will be officially released later on Monday, to UN Secretary-General Ban Ki-moon. By zooming in on the photo it can be seen that it says projectiles containing "the nerve agent sarin were used."

UN inspectors said Monday there is "clear and convincing evidence" that chemical weapons were used on a relatively large scale in an attack last month in Syria that killed hundreds of people.

The inspectors said "the environmental, chemical and medical samples we have collected provide clear and convincing evidence that surface-to-surface rockets containing the nerve agent sarin were used ... in the Ghouta area of Damascus" on August 21. The report mentioned the areas of Ein Tarma, Moadamiyeh and Zamalka. 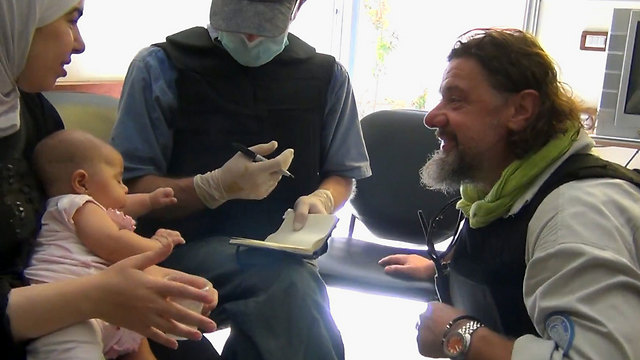 "The conclusion is that chemical weapons have been used in the ongoing conflict between the parties in the Syrian Arab Republic ... against civilians, including children, on a relatively large scale," the inspectors said on the first page of their report to Secretary-General Ban Ki-Moon.

Ban was scheduled to present the report to the UN Security Council later Monday morning. The Associated Press saw the first page of the report.

The August 21 chemical attack unfolded as a UN chemical weapons team was in Syria to investigate earlier reported attacks. After days of delays, the inspectors were allowed access to victims, doctors and others in the Damascus suburbs.

The inspectors were mandated to report on whether chemical weapons were used and if so which ones – not on who was responsible.

The rebels and their Western and Arab supporters blame President Bashar Assad's regime for the attack in the rebel-controlled area of Ghouta. The Assad regime insists that the attack was carried out by rebels. 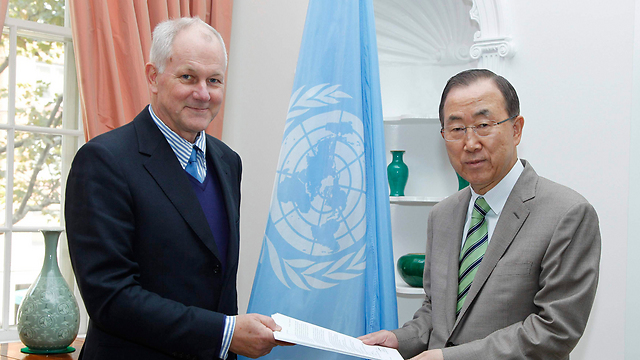 Chief weapons inspector Ake Sellstrom handed over the report to the secretary-general on Sunday amid a flurry of diplomatic activity aimed at getting Syria to put its just-acknowledged stockpile of chemical weapons and chemical precursors under international control for destruction.

In Geneva, the chairman of a UN war crimes panel on Monday said it is investigating 14 suspected chemical attacks in Syria, dramatically escalating the stakes after diplomatic breakthroughs that saw the Syrian government agree to dismantle its chemical weapons program.

Paulo Sergio Pinheiro said the Geneva-based UN panel he heads has not pinpointed the chemical used in the attacks and is awaiting evidence from a separate team of UN chemical weapons inspectors expected to be made public later Monday.

That report is expected to add momentum to a deal to eradicate Syria's chemical weapons program.

US Secretary of State John Kerry ended a weeklong diplomacy tour in Paris on Monday. Just a week ago, he was there lobbying for global support for military strikes against Assad, but after a breakthrough with Russia, Kerry's latest visit was intended to secure support from allies for the deal to secure and then eradicate Syria's chemical weapons arsenal.

Kerry and his French and British counterparts laid out a two-pronged approach in Syria, calling for enforceable UN benchmarks for eradicating the chemical weapons program and an international conference bolstering the moderate opposition.

France and the US insisted that a military response to the August 21 poison gas attack that killed hundreds remained on the table, and were pressing for a UN resolution reflecting that in coming days.

"If Assad fails to comply ... we are all agreed, and that includes Russia, that there will be consequences," Secretary of State John Kerry said.

But Russia's foreign minister said ongoing attempts to threaten the use of force against Syria would provoke the opposition and disrupt a chance for negotiations.

Russian Foreign Minister Sergey Lavrov, in a news conference with his Egyptian counterpart Nabil Fahmy, responded to comments by French President Francois Hollande that the "military option" against Syria was not off the table.

Meanwhile, invitations were going out Monday to top members of the Syrian National Coalition – the main umbrella opposition group – for an international conference in New York timed to coincide with next week's UN General Assembly meeting, French officials said.

Bolstering the Western-backed SNC is just as crucial to Syria's future as Assad's agreement to give up chemical arms, said French Foreign Minister Laurent Fabius.

"He must understand that there is no military victory, no possible military victory for him," Fabius said. He acknowledged that broad popular support for the rebels has been hampered by fears that Islamic militants are now playing a major role in the two-and-a-half-year-old uprising.

In briefing the allies, Kerry was pressing for support for the ambitious agreement that averted threatened US military strikes. It calls for an inventory of Syria's chemical weapons program within one week, with all components of the program out of the country or destroyed by mid-2014.

Those who blame Assad for the chemical attack and supported military strikes say it is up to Assad to uphold his end of any deal.

"It is extremely important that there are no evasions, that there is no cat and mouse game going on over these weapons," said British Foreign Secretary William Hague.

Kerry acknowledged the chemical arms deal would have little immediate effect on the bloodshed in Syria, which has killed more than 100,000 people, but he said full compliance was a key first step.

In Geneva, Pinheiro said the "vast majority" of casualties in Syria's civil war came from conventional weapons like guns and mortars.