According to Ma'an, four female Palestinian officers were trained as paratroopers in Russia. One of them says despite being scared, homeland pride made them 'forget fears'

The Palestinian news agency Ma'an reported that according to an official source, four female officers in the Palestinian national security service have received training in Russia as paratroopers.

"Four women in their early 20s were chosen for this unprecedented experience in the Arab world, and in Palestine in particular," Hafith Rifaay, a national security spokesman told Ma'an. According to him, "they hovered like hawks in the sky seeking to raise the name of a homeland which has always been present in the international arena."

"At first we felt a little bit scared," said Manar Barahma, 20, "but as we remembered we are here to raise the name of our homeland high, we forgot our fears and started to check on each other until we landed safely." 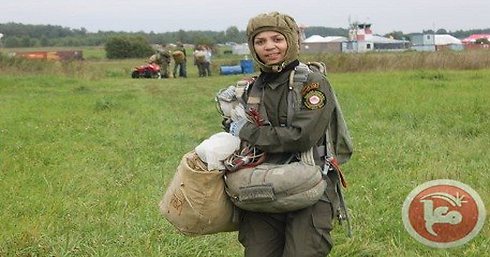 One of the paratroopers (Photo: Palestinian news agency)
According to the report, the four security officers, who were carefully chosen for the training, completed various training courses, including training in 'thunderbolt' units, and will join several other training courses afterwards. Barahma said that she and several other women joined the Palestinian national security services over a year ago.