Israel has already agreed to release 104 prisoners as part of the resumption of peace negotiations. Twenty-six of those prisoners were freed last month. The second phase of the prisoners' release is scheduled for the end of October. The fourth and final release of prisoners is expected to take place on March 28.

In early September, Palestinian President Mahmoud Abbas told a meeting of the Fatah Revolutionary Council in Ramallah that his regime has agreed not to turn to international organizations during the negotiations in return for the release of the 104 prisoners, who were detained by Israel prior to the signing of the Oslo Accords.

Palestinian Minister of Prisoner Affairs Issa Karaka met in Ramallah recently with the families of the 104 prisoners and promised them that they would be released regardless of whether any progress is made in the peace talks. He said the prisoners would be released to Gaza and the West Bank. Meanwhile, Israel has agreed to allow limited quantities of building materials for use by the private sector into the blockaded Gaza Strip starting from Sunday. 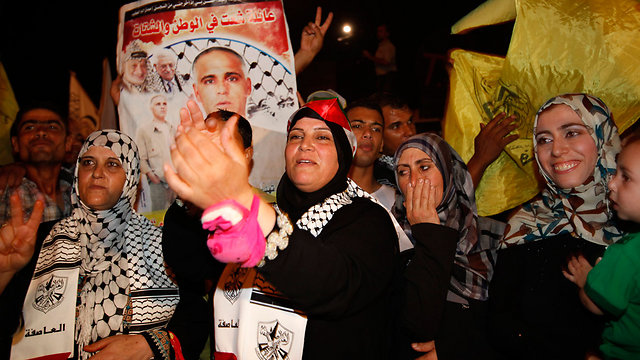 An Israeli official said the move was a bid to "strengthen the economy and support Abbas."

Israel had also began constructing a water line that would double the amount of water supplied by the Jewish state to the Gaza Strip from five million to 10 million cubic meters (353 million cubic feet) a year, the Israeli official noted.

A Hamas government official told AFP allowing building materials into Gaza was a positive development, but insufficient. "It's a positive step, but Gaza needs 6,000 tons of gravel, 4,000 of cement and 1,500 of iron per day," deputy economy minister Hatem Oweida said. Middle East Quartet representative Tony Blair praised "the Israeli government's decision to approve a series of easing measures for the West Bank and Gaza." "This is an important step in building a more positive environment for the diplomatic negotiations," he said in a statement. Last week, Israel approved the allocation of 5,000 work permits for Palestinians from the West Bank. According to the Israeli official, this brings the number of Palestinians working in Israel and West Bank settlements to 100,000, of them some 30,000 without permits. Building materials have long been smuggled from Egypt into Gaza through tunnels underneath the border town of Rafah, but the Egyptian army recently destroyed many of those after ousting president Mohamed Morsi of the Muslim Brotherhood, a Hamas ally.