Head of the Atomic Energy Organization of Iran (AEOI) Ali Akbar Salehi firmly denied on Wednesday the reports regarding his country's willingness to shut down the underground uranium enrichment facility in Fordo.

On Monday, the German newspaper Der Spiegel quoted intelligence sources as saying that Iran's President Hassan Rohani is willing to close the Fordo facility on condition that the West will agree to lift the sanctions against Iran. The report further added that Rohani is also willing to allow international inspectors to monitor the facility's dismantling procedure.

Salehi, who served as foreign minister under former President Mahmoud Ahmadeinejad, denied the report and told IRNA news agency after a cabinet meeting in Tehran that such message was never given by him and it is unlikely that such a declaration was ever made. 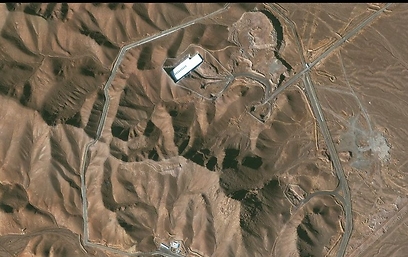 Fordo facility (Photo: Screen shot from British Telegraph)
However, Salehi noted that he is optimistic in regards to a settlement on his country's nuclear issue. According to him, the atmosphere in the meeting that was held this week with members of the International Atomic Energy Agency (IAEA) was more positive than before. Salehi also described his last meeting with IAEA Director General Yukiya Amano as "constructive". After meeting with IAWA representative Tuesday, Salehi said that "Iran is ready to enhance and strengthen engagement with the IAEA." Iran and IAEA have agreed to hold their new round of talks on September 27 in Vienna.

President Barack Obama said on Tuesday that Iran's new president appears to want to open a dialogue with the United States and that he is willing to test whether this is the case.

Obama's comment in an interview with Spanish-language network Telemundo was the latest indication the president would like to jump from the crisis over Syria's chemical weapons to a new search for a diplomatic deal to ensure Iran does not develop a nuclear weapon. "There is an opportunity here for diplomacy," Obama told Telemundo. "And I hope the Iranians take advantage of it. There are indications that Rohani, the new president, is somebody who is looking to open dialogue with the West and with the United States, in a way that we haven't seen in the past. And so we should test it," Obama said. Signs of conciliatory policy are also evident in recent statements by Iran's spiritual leader. Iran's Supreme Leader Ayatollah Ali Khamenei said Tuesday that his country will adopt diplomacy over militarism. "It is time for heroic flexibility," said Khamenei and signaled his intention to adopt Rohani's approach, who has been trying to turn to the international community in regards to a compromise over the nuclear program.

"Heroic flexibility is very useful and necessary sometimes but with adherence to one main condition," Khamenei told members of the elite Revolutionary Guards, "a wrestler sometimes shows flexibility for technical reasons. But he does not forget about his opponent nor about his main objective."