Hezbollah chief Hassan Nasrallah on Monday night denied that his Shiite party had received chemical weapons from the Syrian regime and warned that such accusations threaten Lebanon, Now Lebanon reported.

“These (chemical weapons transfer) accusations have dangerous repercussions on Lebanon… (if Hezbollah opponents) go along with Syrian opposition accusations they will endanger the country and all of its people.” 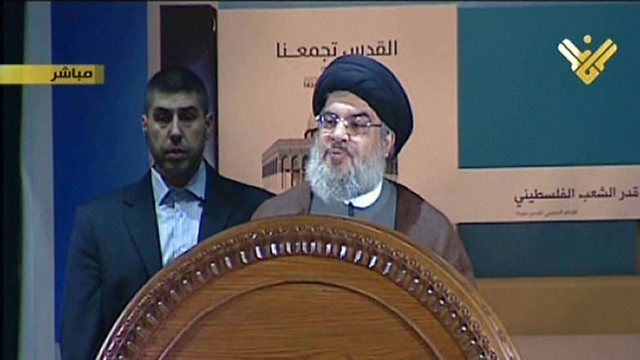 According to Now Lebanon, last week, Free Syrian Army spokesperson Fahed al-Masri alleged that the Syrian regime transferred stocks of chemical weapons to Hezbollah, adding that the Shiite party stored them in Mount Sannine, Ayoun Ourghosh, Al-Yammouneh and near the town of Meshmesh between the Hermel and Akkar countryside.

Nasrallah also said: "Today we're more ready than ever for a national dialogue regarding intervention in Syria." Commenting on American involvement in the region, he said: "What's worse? Pleading Obama to intervene in Syria and take military aggressive actions, which will lead to dangerous repercussions in the area, or that Hezbollah or others send fighters to specific locations for well-defined goals?"

He called on Saudi Arabia, the Gulf states and on Turkey to reexamine their stance on Syria, and urged them to "set the feuds aside, think about the nations in the area and not rely on military action in Syria," as it is doomed to fail.